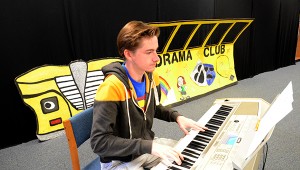 Taylor Montgomery going through his composition for Charles Henderson High School’s original musical “Lakeview’s Circle.” Montgomery has a passion for the arts in various aspects including writing, directing and acting. He plans to pursue his theater career after his graduation from CHHS.
MESSENGER PHOTO/NGOC VO

Taylor Montgomery, the playwright for the upcoming Charles Henderson High School’s original musical, has set his heart for the arts.

“I have a love for theater and literature which makes me want to do something with them,” Montgomery said. “My dream job is to become a screenwriter, a filmmaker and an actor.”

He said he was aware of the uncertainty aspect of his chosen career, but he was committed to doing what he loved.

“I know (going into theater) is putting yourself out there and be vulnerable, you give up so much for the Arts,” he said. “You just have to trust your ability… I want wake up and be able to get excited about what I’m going to do.”

According to Montgomery, he decided a future in theater when his current theater teacher, Judith Park, came to CHHS two years ago.

“I wasn’t planning to do anything with theater but I was forced to audition and I got a part,” he said. “After playing in ‘The Grass Harp’ and ‘Grease,’ I realized I really liked it, and I’m going to keep doing it.”

For his current project, the one-act musical “Lakeview’s Circle,” Montgomery wrote the plot, the dialogue, the lyrics and came up with the melody, he said. He had friends to help with the music composition for the instruments.

“Lakeview’s Circle” is about a theater classroom full of seniors working on a project, he said. The musical deals with the high school stereotypes and how those different groups interact with each other.

“We have the jocks, the nerds, the girls on the phones,” Montgomery said. “The cliques that are not normally comfortable with each other will work on a project that will bring them together.

“The musical is about living the moment. You may not see all your friends after graduation but you will remember the special moments.”

Montgomery said he made great efforts to balance the stereotypical student vernacular with the characters’ unique personalities.

“The hardest thing in writing (Lakeview’s Circle) was coming up with the dialogue for the characters,” he said. “My twin brother and I acted the script out as if we were the characters and tried to create the flow of the dialogue. We would go with whichever we feel like or make us laugh.”

Montgomery said the musical that influenced his writing is “The Book of Mormon.”

“I have always been a fan of songs and musicals,” he said. “I would listen to the songs of (The Book of Mormon) to find inspiration when I wrote ‘Lakeview’s Circle.’”

According to Montgomery, it took him the whole summer to finish the musical’s rough draft. The script then went through several round of editing with the help of Ms. Park.

He said he had, had some challenges with the music for “Lakeview’s Circle” but he had learned a lot from the one-week summer spotlight at Troy University he attended.

“I took a song-writing class which helped me a lot putting together all the information I know about music to make it into songs,” Montgomery said.

“Lakeview’s Circle” is Montgomery’s first fully completed work. He has about 20 rough drafts that he plans to finish.

“I have this thing where I would write something until I get tired from it,” he said. “Then I just leave it in a pile and move on to the next thing I’m interested in. I would get back to it later.”

Montgomery said he plans to go to the University of Alabama to major in theater and minor in filmmaking and telecommunication to further his career in the Arts.