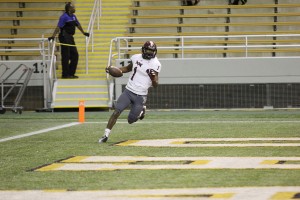 On Sunday, the Walter Camp Foundation awarded Kitchens with the distinction after his three interception performance in the Trojans’ 31-17 win at Idaho last Saturday.

Kitchens is the first Troy player and just the eighth Sun Belt Conference player to ever earn a Walter Camp National Player of the Week award.

This is the 11th year that the Walter Camp Football Foundation has honored one offensive and one defensive player as its national Football Bowl Subdivision player of the week during the regular season. Recipients are selected by a panel of national media members and announced by the Foundation.

One Monday, Kitchens added another honor to his name when he was selected as the Sun Belt Defensive Player of the Week.

With Troy leading by seven in the third quarter Saturday at Idaho, Kitchens intercepted passes on three straight Idaho drives, returning one for a 28-yard touchdown. His second interception was selected as the No. 4 play on SportsCenter’s Top 10 Plays of the Day on Saturday.

His three-interception performance tied the school record for the most in a game.

Kitchens is tied for fourth in the nation with six interceptions this season and ranks eighth nationally averaging 0.55 interceptions per game. His six picks are the most by a Trojan player since 2008.

He also leads the Trojans with 82 tackles on the season, which is 30 more than his next closest teammate, per the university.

The Trojans are currently sitting at seventh in the Sun Belt, with a record of 3-4 in the conference and 3-8 overall.

Troy has won two straight with wins over Georgia State and Idaho in the last two weeks.

Troy will be off this week before hosting Sun Belt opponent UL-Lafayette on Nov. 29 in head coach Larry Blakeney’s final game as Troy head coach.