Temperatures could reach below freezing over the next few days, EMA gives tips for cold-weather preparedness 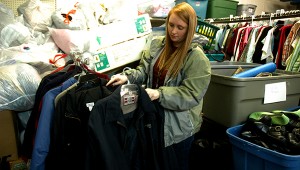 Ashley Grace, assistant manager for Christian Missions, hangs up one of the few coats received during the recent coat drive. Grace said many of the coats donated by a local church have already been handed out to those in need. Christian Missions is actively seeking more donations, especially as temperatures continue to drop.
MESSENGER PHOTO/SCOTTIE BROWN

Winter is coming, and fast.

The National Weather Service has anticipated below average temperatures for the upcoming week with a low of 21 degrees forecasted for today and the low for Wednesday anticipated to be approximately 28 degrees.

Emergency Management director Jeanna Barnes said the first step to cold weather preparedness was to have a family plan, and then to add to the original plan.

“First and foremost, have a plan,” Barnes said. “Every family should have a plan on how they will manage an ice, snow, or an extreme cold event. Once you have a plan, add to this.”

Creating, and maintaining, an emergency supply kit that includes gloves, scarves, hats or other winter gear was another tip Barnes said could be used to keep prepared for emergency weather situations, such as extreme cold.

“A winter weather or extreme cold safety kit should be the same kit you would use during tornado and hurricane season,” Barnes said. “However, there are a few items you may need to swap such as extra clothing for each family member. Ensure you have seasonally appropriate clothing and make sure they fit comfortably. Children can outgrow clothing quickly so it is important to keep current sizes in your kit.”

With the cold weather approaching during holiday season, Barnes said it was also smart to be aware of the weather forecast not only for where you’re leaving from, but also your final destination and any stops along the way.

“Winter is also a busy season for holidays and travelling,” Barnes said. “If you are travelling, be sure to keep up with weather not only at the location you’re travelling to, but also the weather along the route you will be travelling. As we saw in January this year, even small amounts of freezing drizzle, sleet, snow, or ice can create significant travel problems.”

While cold weather may be upon us, Lee Jones, assistant executive director of Christian Missions, said the organization would have coats, food, warm clothes and even emergency shelter for those who would otherwise go without.

“There are a lot of people out there that actually need coats, or the coats that they have are worn out,” Jones said. “They just need a better jacket or a sweater. If people have one, or have several, and don’t use them, it would help if they donate them.”

Although there is currently no homeless shelter servicing Pike County, Jones said those in need of emergency shelter would be given a room in a local motel. Jackie Curtis, manager of Troy’s Christian Mission, said the organization was actively seeking a lot or larger building the Christian Mission could use as a shelter as well as a soup kitchen or food bank to meet the need within the community.

“We are trying to find a larger building in Troy with land, or we’re just trying to find a piece of land so we can build a new building and a shelter,” Curtis said. “We look with Realtors, but we have not been able to do anything right now. People act like there aren’t a lot of homeless people here, but there really are. They come in every single day.”

Christians Mission is located on 104 Pecan St., across from Split Ends, and is open until 5 p.m. during the week.