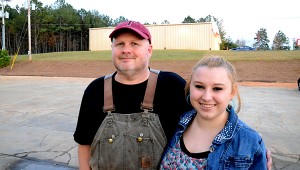 Pictured are, left, Tim Allen and daughter, Sarah Lewis. As a correctional officer, Allen has talked to many inmates who took the wrong path because they do not have a positive role model. Allen is determined to be present in his family and teach his children right and wrong.
MESSENGER PHOTO/NGOC VO

With a self-admittedly interesting job, correctional officer Tim Allen has enjoyed spending 23 years helping people who had fallen in life.

“I was looking into law enforcement field and saw an opportunity to help young men who had taken a wrong step,” Allen said. “I intended to go towards the Game and Fish department, but after working in correction, I felt more useful there. I have enjoyed my job ever since.”

Allen said the reason a lot people get into prison because they did not have a positive role model and someone to help lead them on the right path.

“Many who haven’t been from a stable home ask me what guided me and what I do with my family,” Allen said. “As I was a young man I could have made the wrong decision just like they did. But I had an active, present father and my mother was a regular church goer.”

According to Allen, the inmates he has met over the years leave an impact on him, making him want to spend time with his family

“A lot of time, inmates tell me nobody has sat down and talked to them about life,” Allen said. “That’s why I choose to do so with my children.

“I share with my two boys and two girls some of the things these men have done, letting them know about what I see on a daily basis. I’m hoping they will take in consideration thinking before they act. Most of the time, if you have been taught right and wrong, and you think about it, you would chosen the right path.”

Allen said he taught his children to be aware of what is going on in the world. He talked to them about the effects of drug abuse and about what they would lose if they make the wrong decisions.

He also reached out to the inmates and helped guide them to the right direction.

“I have the opportunity on occasions to go in to preach and share a message with (inmates),” Allen said. “I encourage their faith in the Lord. He has a purpose for everything and it’s going to be okay.”

Allen has received a lot of positive feedbacks, he said. Some inmates even ask him to pray for them and their families in times of trouble.

According to Allen, many people have a misconception towards prison and inmates.

“Normally, people watch TV shows to know about prison,” he said. “That’s not what life in prison is. There are some good men who chose to do the wrong thing, and many just had a bad day. People should get to know them and give them a chance to be able to start their lives once again.”