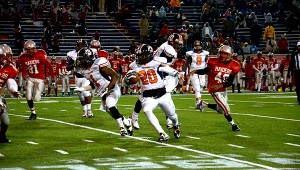 Jared Wilson runs the ball for Charles Henderson while Mondaris Dixon blocks for him during the Trojans matchup against B.C. Rain.
MESSENGER PHOTO/SEAN HOLOHAN

There’s no doubt about it.

The Charles Henderson football team encountered and surpassed obstacles in their 2014 season that no group of high school athletes should ever have to face.

But Friday night in Mobile at Ladd-Peebles Stadium, B.C. Rain was just too tall a task for the Trojans, as they fell in the second round of the 5A state playoffs, 50-14.

Running back Ty Rodgers even joined in on the action for B.C. Rain, completing a 49-yard flea-flicker to Corey Brown midway through the second quarter.

The Trojans’ defense struggled all night to contain the high-powered Red Raider offense that had 13 plays of 10 yards or more.

After a scoreless first quarter that saw each offense exchange fruitless drives for 12 minutes, the game looked as though it would come down to a defensive battle.

But on the first play of the second quarter, Charles Henderson quarterback Austin Ingram’s punt was blocked at the Trojans’ 20-yard line. On the ensuing drive, the Red Raiders scored the game’s first touchdown on a Williams III six-yard touchdown run.

And three minutes later, B.C. Rain got into the end zone again, this time on a Tyler French 29-yard touchdown reception from Williams III.

Charles Henderson never regained momentum, as the Red Raiders outscored the Trojans 36-14 the rest of the game.

Charles Henderson though, never showed any quit though they were playing from behind the majority of the game.

Ingram, who had a special statistical season, went 10-of-31 passing for 134 yards and senior Mondaris Dixon ran the ball 23 times for 77 yards.

But the Charles Henderson offense didn’t do itself many favors, fumbling the ball three times in the game.

Sophomore Jared Wilson finished the game as the Trojans’ leading rusher with 75 yards on 15 carries.

And for a senior class that has been through so much and powered the Trojans’ to a second-round state playoff berth this season, McCoy couldn’t say enough to compliment them.

“There’s no quit in these guys,” McCoy said. “Those senior have been through more than I’ve ever seen in any group and my hat’s off to them. I’m proud to say that I’ve been their football coach this year and I’m just proud to be around them.”