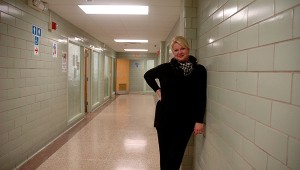 Circuit Clerk Jamie Scarbrough poses above in the courthouse hallway that for more than 20 years was lined with court documents and filing cabinets. The employees in her office have worked to convert more than 3 million documents to digital format during the past two years.
MESSENGER PHOTO/SCOTTIE BROWN

Since receiving a citation from the fire marshal and a mandate from the Chief Justice for the State of Alabama, the Pike County Clerk’s Office has digitized more 3 million documents for its department.

Since October 2012, Circuit Clerk Jamie Scarbrough said the office had worked hard to scan and upload documents from filing cabinets that stretched down the hallway of the courthouse in front of the Circuit Clerk office.

“We had an issue with our filing cabinets in the hallway,” Scarbrough said. “Those had been here over 20 years ago, probably close to 25 years or more. Our hallway was lined with cabinets, and the fire marshal said we had to remove them. We used them daily, so we had to have access to them.”

While a majority of the files have already been scanned and properly disposed of, Scarbrough said the office had taken extra steps with juvenile files and files for Class A felony classes.

“The only files we maintain are juvenile files, that system has not been perfected,” Scarbrough said. “That system is taking longer because those cases or highly confidential. We also, just as a precaution, keep paper files on all Class A felonies. We have an electronic file, but we also have a paper file just to have all the paperwork on those.”

Alafile is an online program accessible to anyone wanting to use the program, which allows a person to create claims online and receive immediate action on their claims and receive prompts by email when an update is made for their claim. Scarbrough said the program was especially helpful to small business owners who find themselves constantly filing smaller claims with the circuit clerk’s office. After registering for the website just one time, Scarbrough said the filing system would be accessible in any county.

“Once you register you can use it in any county in the state of Alabama,” Scarbrough said. “If you’re a loan company that has businesses in different counties, you sign up one time and you actually use that for different counties. You don’t have to go to each individual county.”

While the Scarbrough says the office has made strides with scanning in the documents, employees are still actively working to scan in documents when they have the time.

“We’ve all discussed it in the office, when we catch up on work, if nobody needs help, you go grab files and start scanning,” Scarbrough said. “Even the files that were marked scanned and put out there, we still have to go out there and check. We still pull up every record before we get rid of anything.”

“It was a gigantic step for our judges to rely on the computers for everything,” Scarbrough said. “It was a huge step for all of us to not have to have a paper file when we’re working. Now, I can’t even imagine it any other way. It’s so convenient. Overall, it’s great. It really is.”

Although a citation was received before the hallway was be cleared out, Scarbrough said she was thankful the Circuit Clerk’s office had been able to work as hard as they had to provide access to all of the documents.

“When the fire marshal came and issued me a citation to get it done, we got the entire hallway cleared out,” Scarbrough said. “Once we had it cleared, state came and picked up the cabinets. We’re just thrilled to have it all done.”