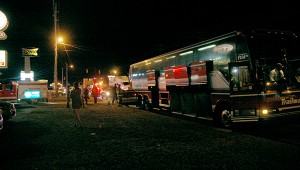 At approximately 6 p.m. Friday, a bus transporting Troy University Phi Mu sorority members and dates to their semi-formal in Montgomery experienced an engine problem on US Hwy 231 South, in front of Captain D’s. According to authorities on the scene, the charter bus’s motor blew up, however there was no fire. Troy Fire Station Two responded to the scene promptly and no injuries were reported from the incident.
MESSENGER PHOTO/SCOTTIE BROWN