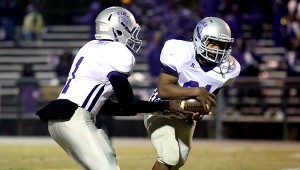 Pike County High School’s Jerrell Lawson (1) passes off the ball to Tyrec Johnson (31) in the second round of high school play-offs on Friday, November 14, 2014 in Gordo, Ala.
SUBMITTED PHOTO

GORDO—One play was all that the Gordo Greenwave needed to change the momentum in Friday’s 21-20 win against the Pike County Bulldogs. That play came late in the third quarter when Gordo’s Day’Lon Rice made an interception and put an end to a Pike County drive. The interception led to Gordo’s eventual game winning score, which came when running back Alihaj Latham ran the ball in from the three-yard line to put the Greenwave ahead.

“Day’Lon is such a hard worker,” Gordo quarterback Koy Chapman said. “He gets after it every day in practice, big play and he really got us spark.”

The Greenwave went up 7-0 in the first quarter when Chapman found wide receiver Tyler Davis for a 38-yard touchdown. Pike County answered back in the second quarter with a 25-yard touchdown strike from quarterback Jerell Lawson to wide receiver Xavier Allen. The two teams then traded scores to end the first half at 14-14.

The Bulldogs took the lead on their first play offensive play of the second half when Lawson connected with wide receiver Deshon Cowling on a 71-yard pass that was fumbled by Cowling but eventually recovered by Pike County in the end zone for a touchdown. Gordo blocked the ensuing extra point and that ended up as the difference maker in the game.

“I thought it was a hard fought game,” Gordo coach Ryan Lolley said. “We have been  in those types of battles all year and I feel like our team was ready for a hard fought game. In the playoffs we are going to see great teams every week. Pike County has a great football team with a lot of tradition and we have a tremendous amount of respect for them. We are just happy with how we played.”