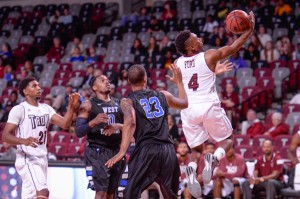 College football might still be in full-swing, but mid-November means it’s time for college basketball to add its name to the fold.

The Troy men’s basketball team will open up their regular season Friday night at Trojan arena when they host NAIA opponent Brewton-Parker.

The Trojans are entering their second season under head coach Phil Cunningham, who lead the Trojans to an 11-20 overall record last year and a 6-12 record in the Sun Belt, which was good for eight place in the conference.

Among those three players returning this season are senior leading rebounder Kevin Thomas and sophomores Kelton Ford and Jordan Howard.

This offseason, Thomas was named to the All-Sun Belt third team. Thomas, Ford and Howard accounted for 19 percent of the Trojans’ points last season and 22.6 percent of the rebounds.

Supporting the trio is a breadth of youth. The Trojans welcome nine new players to the squad this year, five of which are freshman.

Cunningham knows breaking in so much new talent on the team will mean the Trojans will have to take their lumps early in the season as the team meshes.

And to make matters worse for Cunningham, injuries have taken their toll on the Trojans even before the season could get underway.

“Our junior college guard (Jeremy Hollimon) in all likelihood is out for the year. He had knee surgery,” Cunningham said. “The one (injury) that has really been disruptive to our team at this point is Oskar Reinfelds. He is one of our experienced guards. He has one year of Division 1 experience. We only have seven years of Division 1 experience on our team.”

But injuries aside, Cunningham thinks what the Trojans lack in experience, they can make up for in athleticism and defense.

Tip off against the Barons is set for 7 p.m.