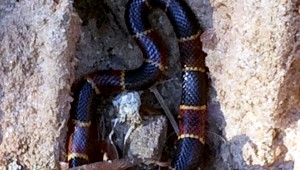 Seth Copeland took this picture of what he believes was a coral snake near Clayton. The poisonous snake isn’t common to these areas, and the last verified report of one was four years ago, Copeland said.
SUBMITTED PHOTO

Seth Copeland was marking timber just north of Clayton last week he saw something few people get to see in the wild.

“As soon as I saw the red and yellow markings of the snake, I knew it was either a king snake or a coral snake,” Copeland said. “Then I remembered the rhyme, ‘red touch yellow, kill a fellow’ and I was glad I had my snake boots on.”

Copeland recognized immediately that the snake at his feet was a highly venomous coral snake. He didn’t have to wait to recall, “Yellow touches red, soon you’ll be dead.”

“If the red and black rings touch, it’s a king snake but, when I got a good look at it, there was no doubt, this one was a coral snake,” Copeland said. “Not many coral snakes are sighted around here so I took a picture of it with my phone so I could have it verified that it was a coral snake.”

Copeland is employed by The Chattahoochee Valley Forestry Services, which is owned by Darrell Gates who has been in the timber business in Alabama and Georgia for 35 years.

“Mr. Gates said he had never even heard of anyone claiming to have seen a coral snake before,” Copeland said. “But I have two confirmations that the snake was a coral snake. Mark Sasser, a wildlife biologist with Alabama Wildlife & Freshwater Fisheries, said it was a coral snake, no doubt. And Craig Guyer, curator of herpetology at Auburn University identified it as a coral snake. Copeland said his sighting was thought to be the first sighting in Alabama in four years.

“The last recorded sighting in Barbour County was before 1975, so seeing a coral snake is rather rare,” Copeland said. “I guess I was just lucky.”

Copeland said he didn’t attempt to kill the three- to four-foot snake. “It was trying to get away when I saw it,” he said.