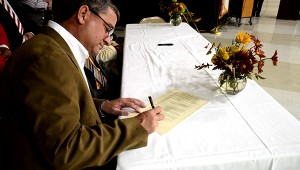 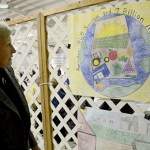 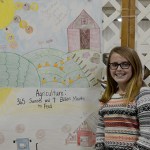 As Paul Harvey once said, God created a farmer because he needed someone with “arms strong enough to wrestle a calf and yet gentle enough to deliver his own grandchild,” and this year’s Farm City Swap proved a farmer, and a surgeon, can do both.

Troy surgeon Rick Gill and farmer Kevin Stephens participated in the annual event held by the Pike County Chamber of Commerce, which Farm City Chairman Randy Hale said works to teach those who live in the urban parts of a city what it takes to be a farmer and vice versa. After spending time as a cotton farmer, Gill said he had gained a new appreciation for how Stephens lived his life.

“Everything is beyond their control,” Gill said. “Yeah, they can put gas in the tractor, buy the new tractor and do everything right, but if the weather doesn’t line up, it just doesn’t happen.”

The banquet didn’t just focus on this year’s Farm City Swap, but instead culminated the activities from Farm City Week. Awards were given out for different agriculture and farming aspects. Jeff Knotts, a member of the Farm City committee, said the award winners were chosen based on their abilities as well as the amount of time they had been doing their jobs.

“Each award is a little bit different,” Knotts said. “A lot of the things rely on how long you’ve been doing certain things. Other ones are how well you do it, and how well your peers look up to you for what you do. A lot goes into the selection of an award winner.”

After paying his dues as a farmer, Gill said he would gladly swap places with Stephens again.

“I would love to,” Gill said. “We actually have some land at our house we have some miniature horses, some chickens. We’re trying to get a calf, but ours is more of a petting zoo than a farm. This experience has made me desire to do more of that, and because the kids love it.”