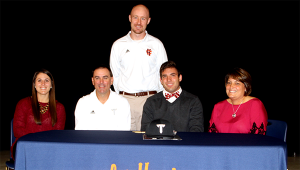 Chase Smartt, second from right, signed a baseball scholarship to play on the same field as his father Mark Smartt, While Smartt is currently the assistant coach for the Troy Trojans, he will be named head coach following the 2015 season and will have the opportunity to coach his son.
MESSENGER PHOTO/DAN SMITH

Chase Smartt would have rather been on the baseball field than at Disney World.

Each and every year, Chase was not there to watch, he was there to be around the game he loved, and those Troy University players became his big brothers as much as his teachers.

On Wednesday, his dedication to the game and talent as a catcher and hitter landed him a scholarship with Troy University, in a signing ceremony at Charles Henderson High School.

“It was an easy decision,” Chase said. “I grew up here for 13 years. My dad played here, and my mom and sister went to school here. I just want to keep the family tradition going. I always knew I wanted to play here. This is my home.”

With his senior season at CHHS just a few months away, what Chase Smartt has done to this point under Head Coach Derek Irons has been nothing short of dominant.

As a junior he led the 2014 team in batting average, hits, runs, doubles, triples and RBI. Chase was named to the 2014 ASWA All-State Team, Super All-State Team, was the ASWA 4A Hitter of the Year, and has been selected to the prestigious Perfect Game Underclassman Pre-Season All-American Team.

What sets Chase apart from other gifted athletes is his humbleness. There is not a boastful word in his vocabulary, and his work ethic is relentless.

Chase will not only play baseball on the field his father played as a member of the Troy State National Championship teams of 1986 and 1987, but as the current assistant coach, Coach Smartt will become the head baseball coach of Troy University following the 2015 season.

“As you can imagine, I am awfully proud,” Coach Mark Smartt said. “I am proud not only of what he has done on the field, but he is also the type of young man that does all the right things off the field. He has earned this over the years, as he has received all kind of help from his high school coaches and teammates, playing with summer teams and fall teams and others.

“This is a great day for him, my wife Debbie, his sister Taylor, and we are so proud. One of the things I am most proud of, and this is coming from Coach Irons and his other summer team coaches, is that he is a great teammate. He wants to win and is not a selfish player. He is willing to help others, and I am really proud of that. I believe he will be a terrific addition because of who he is as a young man. As a dad, this is something to be proud of.”

Coach Irons is proud to see many of his players sign college baseball scholarships, but especially happy that Chase will be playing just a short drive from the campus of CHHS.

“It’s always a great day for our program when we have a player sign to continue his baseball career after high school,” Irons said. “It is a culmination of years of hard work for Chase and I’m very proud of him and the work he has put in over many years to reach this milestone in his life.

“Chase has been an integral part of our team since he was an 8th grader. His work ethic has allowed him to develop his talent as well as any player I’ve ever been around. He handles himself well on and off the field and has set a wonderful example for younger players in our program and in our community to follow.”