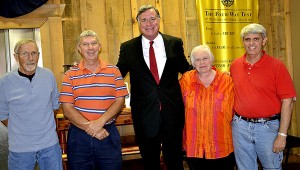 When Steve Flowers talks, everybody listens.

That’s why Chip Wallace was excited to introduce Flowers as the program guest at the Wednesday meeting of the Brundidge Rotary Club.

“Steve is Alabama’s most watched and read political columnist and commentator,” Wallace said.

Flowers is known and appreciated for his humorous stories and he quickly entertained the Rotarians with “Big Jim” stories.

Flowers said Gov. “Big Jim” Folsom was responsible for the farm to market roads that made it easier for farmers to get their products to the market.

When Folsom was running for governor, he traveled all across the state going door-to-door getting to people and giving them an opportunity to know him.

One afternoon, Flowers said, “Big Jim” spent about three hours sitting and talking with a farmer and his wife in Geneva County.

“They just bonded – the farmer, his wife and Big Jim,” Flowers said. “While he was there, he drank three quarts of buttermilk. When he was elected governor, the first farm to market road he built went by that farmer’s house. It was named Buttermilk Road and it’s there today in Geneva County.”

Flowers turned his remarks to the “dull” November election.

“The Democrats were wiped out. They can turn the lights off and leave the key on the mantel,” he said. “Democrats can’t win statewide any longer.”

“The Republican Party is strong in Alabama,” he said. “That was evident in last week’s election.

Flowers said the re-election of Gov. Robert Bentley was evidence of the trust voters have in him.

And while last week’s election as dull, Flowers said he wasn’t disappointed in the voter turnout.

“Forty-one percent statewide was not bad and Pike County was at 47 percent because we had good local races.”

Flowers said Russell Thomas’ landslide win was one of the most impressive victories he has seen.

“And Curtis Blair’s re-election numbers were also impressive,” he said. “Jimmy Holley’s election was the best thing that has happened for Pike County. He’s one heck of a legislator. He’s hard working, competent and he’ll get things done.”

Looking head to 2018, Flowers said the presidential race will be fun, as a bunch of hopefuls will make a run for the nation’s highest office.