FC Troy to compete for state title over weekend 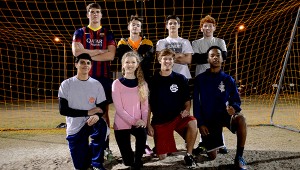 With a team comprised almost completely of a state championship winning team, the 18 and under recreational soccer team will once again be heading back to state.

State play will begin for the team on Saturday in Opelika, and Baylor Barnes, goalie for FC Troy and member on 2013 Troy B team, said he hoped the tournament would provide stiff competition.

“I’m super excited,” Barnes said. “I don’t know anything about the competition. We’ve played Eufaula, but we beat them already. I think it should be very competitive. I’m looking forward to playing competitive teams. Hopefully, they’re all close games.”

Adam Grice, another member of the 2013 championship team, said that the team’s strongest aspect on the field was their defense.

“We’re probably going to have to swap out more this year, and pace ourselves,” Grice said. “Our strongest suit is probably defense. We’ve got a strong defense, and we keep them from scoring.”

Head coach for FC Troy Doug McLendon said this year’s competition would be different with the team playing four games during the course of the tournament, but is not worried about how the team will handle themselves in the extra games.

“They like to compete with each other,” McLendon said. “They have a good time. It’s literally what it’s supposed to be. It’s a recreational league situation, and I think the way they go about it is what makes them so good. Most of them have been playing together for quite a few years, so when it’s time to work they know when to stop messing around and getting to work.”

FC Troy will begin tournament play Saturday as they face Sylacauga at 10 a.m. in Opelika.