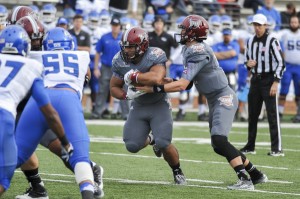 Messenger Photo/Joey Meredith
Troy running back Josh Anderson takes a hand off from Brandon Silvers in the Trojans’ 45-21 win over Georgia State Saturday. The Trojans racked up a total of 324 rushing yards against the Panthers.

Troy football will have the opportunity to do something Saturday they have not been able to do since Oct. 12 of last year — win two straight games.

Coming off of their dominating 45-21 victory over Georgia State last Saturday, the mood in the Trojans’ camp Monday was much more upbeat and confident than it had been since their last win against New Mexico State in October.

The Trojans (2-8, 2-4) didn’t fare well coming off of that win, however, losing in a 53-14 beat down at the hands of Appalachian State. The Trojans’ defense was scorched for 441 yards on the ground and were left speechless after four unanswered scores following an early 7-0 lead.

But this time around, the Trojans’ attitude going into Saturday against Idaho is slightly different than that of their attitude before their loss to the Mountaineers.

The Vandals (1-8, 1-5) might be anemic on defense and middle-of-the-pack on offense, but that isn’t fooling Troy’s coaches.

“They’re big up front: 6-8, 6-9, 6-7, 6-3,” defensive coordinator Wayne Bolt said Monday. “They got two big tackles. Their quarterbacks are efficient. They can throw it, got good wideouts. It’ll be a good deal.”

“They’re a team that does not try to fool you,” Eddenfield said. “They’re going to line up. They like to play a soft umbrella in the back, try to keep the ball in front of them. There’s some grass in there to hit some windows. Maybe we’ll be able to do that.”

Key to Troy’s success Saturday will be the running game. In the Trojans’ two victories this season, the offense has run for over 300 yards each game. And against an Idaho defense that struggles mightily against the rush, the odds for another 300-yard rushing performance are certainly on the side of the Trojans.

“You rush for 300, you’ve got a better chance as you are dominating the clock and your setting yourself up,” head coach Larry Blakeney said Monday.

And although temperatures are forecasted to be around 20 degrees come kickoff Saturday, Troy can take solace in the fact that the Vandals play indoors. And no one is happier about that than Blakeney, whose last experience in a cold weather game ended in a 70-7 shellacking at Montana in 1996.

“That’s huge (being in a dome). We have had one experience when we played on the frozen tundra, Montana. It was not a very good experience,” Blakeney said. “It shouldn’t be a problem for us, because how we approach offense. So we will see. Hopefully we will be able to deal with it.”