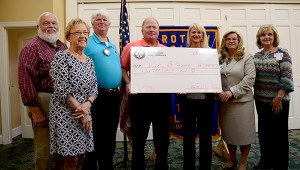 Vickie Sipper proved herself a “true Rotarian” on Tuesday, when she won the club’s balloon launch fund-raiser and returned the money to the club.

“She is just that kind of person,” said Karen Herring, Troy Regional Medical Center community relations director and a Rotarian “She, without hesitation, turned around and gave the money back to Troy Rotary. That’s just the kind of person she is.”

The Pike Medical Foundation and Troy Rotary Club partnered for the 2014 Balloon Launch, which benefitted the medical foundation.

Although a winner has been announced, Herring said balloons were still being found and those who find them have continued to call into TRMC.

“We tracked them for seven days, and at that time tracking was closed,” Herring said. “The gentleman (who won) found the balloon over in Macon, Ga., but since that time, other balloons have been found and reported. They’re scattered about and still being found.”

Sipper had purchased the balloon ticket, making her the Rotary winner.

Herring said the project had not only been a success, but was fun to participate in.

“It was so much fun,” Herring said. “It was a relaxed project. It was something everybody on the PMF bought into. We had a couple of members who sold more than 25 tickets each. They just tapped into it. Every Rotarian bought at least one ticket.”

The fundraiser sold just over 240 balloons and brought in approximately $24,000, and Herring said the money would be well used to update the TRMC emergency department.

“We are not completely shelling it out, but I do believe there will be some structural flow changes made,” Herring said. “The belly of the hospital is that lobby, and through the years we’ve been able to add on, add on, add on. When you add on, it becomes a little difficult to navigate sometimes. We’re just going to hope to make some structural and some aesthetic changes.”

Herring praised the generosity of Sipper, Rotarians and the community members who helped make the project a success.

“It was the sheer work and dedication of Troy Rotary and Pike Medical foundation working together to support this community hospital through this project,” Herring said. “It is amazing the amount of support we received from our local businesses and industries. We have some of the most generous industry and business owners in the state of Alabama that contributed to our campaign.”