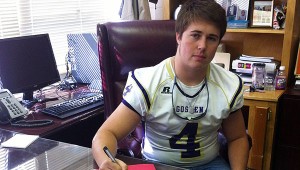 Goshen’s Tyler Phillips excels in the classroom, on the football and baseball field and among his peers as a student government leader.
SUBMITTED PHOTO

One of the messages Tyler Phillips, a senior at Goshen High School, wants to leave the school after his upcoming graduation is that a student can excel in academics and athletics.

“I just want to show other kids that you can be a valedictorian, a football player and an SGA president if you work hard enough,” Phillips said.

Phillips leads his class academically. He plays football as a fullback and linebacker, is the first-baseman on the baseball team and is serving as the Goshen High School SGA president.

Phillips said the SGA responsibilities and sport practice do not affect his study time too much.

“It takes around three to four hours a week doing SGA when there are no big events to prepare for,” Phillips said. “Most of my friends are on the football team. I still have social time.”

The SGA is in charge of organizing homecoming, the parade and fundraisers throughout the year, Phillips said. SGA also helps answer students when they have questions and issues.

Phillips has been involved with the SGA since seventh grade as a class representative.

“I decided to run for president because I want to lead, to help others and to help things get done around the school,” Phillips said.

He has also been on the Goshen football team since his freshman year.

“I have played football ever since I was 7 years old,” Phillips said. “Every year I have been on the (Goshen) team, the team has made it to the playoffs.”

Phillips has football practice from 3 to 6 or 6:30 p.m. Monday to Thursday, and plays games on Fridays. Like most other high school athletes, he said he’d like the opportunity to play in college and hopes to attend Auburn University.

“I’ve always been an Auburn football fan,” Phillips said. “They also have a good engineering program. That’s what I want to be, (an engineer). I like to build things, to draw them out. Math and other sciences have always been easy for me.”

According to Phillips, his goal for the rest of the year is to work hard for good grades and become valedictorian. He hopes both the football and baseball teams will go deep into the play-offs.

From the heart: Townsend shares ‘what I know for…