Paying Honor: Vets left ‘a part of themselves’ 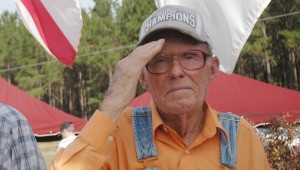 Max Thrash paused to salute the flag he served during wartime during the ceremony at Elam Cemetery.
MESSENGER PHOTO/JAINE TREADWELL

Sherling served his country in the United States Army for 13 years before being medically discharged.

He received the Purple Heart for wounds suffered by instruments of war in the hands of the enemy. He was also honored for valor displayed under difficult and dangerous circumstances.

During two deployments, Sherling was on 1,100 patrols and experienced 13 IED attacks. He is a member of Wounded Warriors and the Military Order of the Purple Heart Society.

But Sherling, of Troy, said he was not at the Veterans Day program to talk about himself. He was there to talk about the veterans who left a part of themselves on the battlefields in far and distant countries.

“Many veterans left a part of themselves over there,” he said. “And, many of them may never find what they left.”

“But, something greater than ourselves drove us into the ranks,” he said. “You learn to depend on the man on your left or your right. And you ask, ‘If not me, who would fight?’ and you know why you are there.”

Sherling shared the history of Veterans Day going back as far as June 28,1919 when the Treaty of Versailles was signed and ‘The Great War’ officially ended.

However, fighting ceased seven months earlier when an armistice between the Allied nations and Germany went into effect on the 11th hour of the 11th day of the 11th month. “November11, 1918 was thought to be the end of the ‘war to end all wars,’” Sherling said. “We missed on that.”

In November 1919, President Woodrow Wilson proclaimed November 11 as the first commemoration of Armistice Day as a way of honoring all Americans who answer their country’s call to service.

“Veterans Day is a time to honor those who served and those who continue to serve,” Sherling said.

Songwriter and musician Lenny Trawick closed the 2014 Veterans Day Program at Elam Cemetery with a song he wrote for his dad but is appropriate for veterans of all wars.

“The song is about ordinary men who do extraordinary things in service to their country,” Trawick said. “These soldiers, these ordinary men, are America’s unlikely heroes.”

Trawick said these unlikely heroes, these ordinary men, are the ones who raise Old Glory in the mornings and take her down with pride when the sun begins to set.

Most people aren’t aware of the high price veterans have paid for our freedoms, Trawick said.

“So, if you meet them won’t you shake their hands and thank them, these ordinary men, for keeping us all free.”