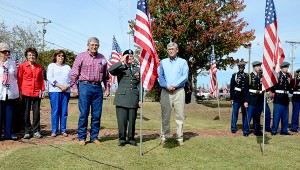 Citizens and veterans from across Pike County gathered Tuesday in honor of those who have fought and will continue to fight for America.

More than a hundred people gathered in Bicentennial Park at the 11th hour of the 11th minute of the 11th month of the year, a moment marking the end of World War I, to celebrate Veterans Day.

Those in attendance heard from Sgt. Maj. John Ballard, a retired U.S. Marine who served five tours in Iraq and one tour in Afghanistan. Ballard spoke not just about his time in the service, but also about what families often endure sending loved ones into any branch of the military.

Although retired, Ballard continues to serve veterans and his country on a daily basis. Ballard said any time he is given the chance to help a veteran in anyway, he would.

“Any time, as a veteran, that I am asked to do something for veterans, I am honored to do it,” Ballard said. “I retired from the Marine Corps after 26 years, and since that time I have continued to serve veterans. That’s what I do every day. I work for the Department of Veterans Affairs, because it affords me the opportunity to continue to serve veterans.”

The perimeter of the park was lined with American flags Tuesday, and Katie Hale with the Unit 70 Ladies Auxiliary said each of the flags posted represented a name on the memorial placed at Bicentennial Park, honors veterans dating back to the Spanish-American War.

“These flags mean something,” Hale said. “They’re not just here for the holiday. Each flag is a name on that wall.”

Hale said several of the flags had been taken from the park earlier in the week, but Woodmen of the World replaced those that were stolen.

The ceremony was a joint effort from the City of Troy and the American Legion Post 70, and Troy Mayor Jason Reeves said he was proud of the efforts the city and Post 70. Before leaving the podium Tuesday, Ballard urged and challenged the citizens of Pike County to go out into their community and speak with a veteran. Reeves had similar sentiments.

“Every day should be Veterans Day,” Reeves said. “As sergeant major said, there are veterans who are in need every day, whether they’ve just come home from service or whether they served 65 years ago. There is always a need, and our community is good about filling those needs. I would, as he challenged our community, challenge them to be good to our veterans.”