From the heart: Townsend shares ‘what I know for sure’ about the value of veterans during annual breakfast 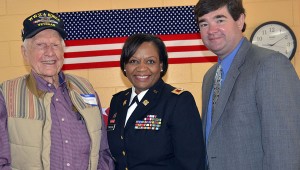 Troy Mayor Jason A. Reeves, right, and Col. (Retired) Billy Jackson of the Banks community welcomed Col. Teresa Townsend to Troy and expressed appreciation for her service to America. Townsend was the featured speaker at the Veterans Breakfast at the Colley Senior Complex Tuesday.
MESSENGER PHOTO/JAINE TREADWELL

Col. Teresa Townsend put aside her notes and spoke from the heart at the Veterans Breakfast hosted by the Colley Senior Complex Tuesday morning.

Townsend, Equal Opportunity Advisor for the 4th Brigade, 75th Battle Command Training Division, the guest speaker for the annual Veterans Breakfast, said she awakened with no feeling for her planned presentation.

Townsend’s topic was borrowed from Oprah Winfrey’s book, “What I Know for Sure,” and she highlighted five things that she knows for sure that apply to America and its veterans.

Townsend said, although America is not a perfect country, she is proud to be an American.

“I would not want to live anywhere else,” she said. “I know for sure I won’t forget those who defend my country and our way of life. I am an American and I want to stand for something bigger than myself.”

Other than the status as a Child of God, Townsend said she is most proud that she is an American and that she has had the opportunity to server her country.

“Our unsung veterans – the mothers and daddies, the wives and husbands, the sons and daughters, the grandparents and the aunts who wait at home and take care of the things at home, they are the unsung veterans. They are overlooked. I know that for sure and I salute you.”

Townsend said Americans are blessed to live in the greatest nation on earth.

“And our veterans have given us freedom and peace of mind. I know that for sure,” she said.

Townsend closed with the poem, “It is the Soldier” by Charles M. Province as a reminder that it is the soldier who has given Americans freedom of religion, of the press, of speech, the freedom to protest, the right to a fair trail and the right to vote.

“It is the soldier who salutes the flag, who serves beneath the flag and whose coffin is draped by the flag,” this, Townsend said, she knows for sure.