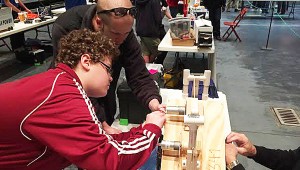 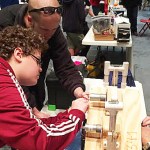 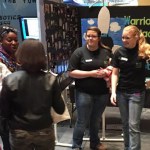 Tori Wentland and Nikki Hughes from the TPCT team speak to visitors who came to the sales and marketing booth. SUBMITTED PHOTO 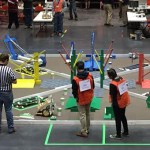 Members of the Pike Liberal Arts team put their robot through its paces during competition. SUBMITTED PHOTO

Two teams from Pike County participated in the BEST Robotics competition in Ozark on Saturday. The competition is designed to engage and excite students about engineering, science, and technology. The Troy Pike Center for Technology sent a team of approximately 20 students, including representatives from Goshen, Charles Henderson and Pike County High Schools. The TPCT team placed fourth overall. Pike Liberal Arts School sent its first team to the competition this year, and the team placed seventh overall. It was the only new team among the 15 competing teams.