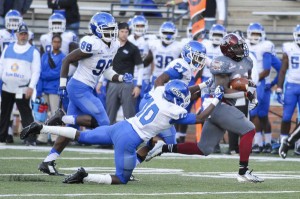 Brandon Silvers would not be denied.

Up 21-7 early in the third quarter, Silvers faked a handoff to running back Brandon Burks and saw nothing but green grass in front of him.

As he approached the pylon in the corner of the end zone, two Georgia State defenders met him, poised for a head-on collision.

But the redshirt freshman quarterback, whose injuries and poor performances in the last two weeks for the Trojans had many wondering if he was still the best choice for starting quarterback, leapt into the air, flipping over the two Panthers defenders and into the end zone, scoring on a 30-yard rush and burying a dagger into the hearts of the Panthers (1-9, 0-7).

“I didn’t know if I was going to run him over or go over the top,” Silvers said. “I was kind of in between, so I didn’t go as high as I wanted to. Luckily I didn’t break my neck.”

The Trojans (2-8, 2-4), like Silvers, would not be denied in their quest to prove their record was not indicative of their talent as they defeated conference opponent Georgia State 45-21 Saturday at Veterans Memorial Stadium.

“It was a game that I don’t know who needed it the most, us or them,” Troy head coach Larry Blakeney said. “We were pretty much able to control the process of the game…our quarterback Brandon Silvers was well and he played really well tonight. I think he made a statement for himself and the Troy program tonight.”

The win marked Larry Blakeney’s 100th home win at Troy and his 177th overall, a record good enough to pass legendary Auburn head coach Shug Jordan for third all-time in wins in the state of Alabama.

In addition to Silvers’ acrobatic score, four other Trojans scored on the ground Saturday.

Redshirt freshman running back Josh Anderson was the first Trojan to strike when he capped off Troy’s opening drive of the game with a six-yard TD run.

Brandon Burks, who like Silvers showed a return to form Saturday, scored next on a three-yard run with 17 seconds left in the first quarter to put Troy up 14-7.

Burks rushed for 118 yards and a TD on 13 carries Saturday, his best since his 176-yard effort in the Trojans’ last win against New Mexico State.

And touchdown runs by Jordan Chunn and Khary Franklin put the game out of reach late in the second half as the Trojans took a 45-14 lead.

“It feels great because we know if the running game is there, the passing game will be, too,” Burks said. “Our line was working all week, all the weeks. I think they did really good blocking wise and all of us knowing our assignments.”

Silvers, who showed his lingering back injury was not an issue Saturday, was also efficient through the air, completing 17-of-21 passes for 111 yards and a 31-yard touchdown pass to wide receiver Bryan Holmes.

Defensively, the Trojans’ bent but did not break.

“We really were just fighting, not trying to give up any scores,” senior cornerback Ethan Davis said. “Definitely, God blessing us with those turnovers. I am definitely thankful for it.”

The Trojans forced two Georgia State fumbles, recovering one of them.

Anthony Williams pitched in with a sack of his own of Arbuckle and Jamal Stadom and Lonnie Gosha combined for a half sack of the quarterback.