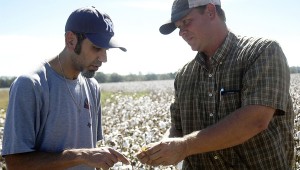 “This is easy,” Gill said as he bent over only slightly and carefully stretched the wispy white fiber from its prickly place.

Gill picked up the pace and quickly got the “point.” The cotton boll can bite back.

The surgeon checked the damage to his finger. Picking cotton wasn’t so easy after all.

“Two hundred pounds?” he asked. “How much is this?”

Stephens laughed at Gill’s handful of handpicked cotton. “That’s not a half ounce.”

Gill looked at the cotton in his hand and the huge field of white before him. He and Stephens both laughed.

The idea behind the Farm-City Swap is for a member of the farming committee and a member of the urban community to swap jobs for a day. At day’s end, each should have gained a greater appreciation of and respect for the other’s chosen profession.

Gill was only two cotton stalks down the row before Stephens had earned his admiration and respect.

“The next day my hands and back were sore and I can only imagine the toll picking that cotton would have on a person’s body day in and day out,” Gill said. “It is very physically challenging.”

Gill said working with Stephens and having the opportunity to pick cotton by hand and operate the combine was a “phenomenal experience.”

“The cotton land was beautiful and it felt so good to be outside,” he said.

When it was Stephen’s turn to trade the farmer’s straw hat and overalls for a blue hairnet and a surgeon’s white coat, he admitted that he was a bit nervous.

And, when Gill told Stephens that he was going to allow him to remove stables from a patient’s stomach, Stephens turned as white as the cotton in his 300-acre field.

“I didn’t think I would do anything as serious – as post-op,” Stephens said.

Gill explained the exact procedure for pulling out the staples and then removed a few before turning the staple remover over to Stephens.

Under the watchful eye of a skilled surgeon, Stephens did just as he was told and once the first staple was removed, he was able to relax, “a little.”

“It was a great experience,” Stephens said. “But I don’t want to do it again.”

Stephens said one day of playing doctor was enough for him. He was much more at home in his cotton picker “surgically” removing a module of cotton.

“I’ve always had a lot of respect for doctors and I have even more respect for them now,” Stephens said. “My job and Dr. Gill’s are similar in that we both work for ourselves and have set schedules for doing things. We both have emergencies that come up but my emergencies are usually broken equipment, things like that. Dr. Gill has people emergencies.”

Stephens said he had no idea how thorough a doctor has to be when talking to his patients.

“Dr. Gill goes into great depth and he explains everything and answers questions to make sure the patients understand the procedures and what they must do as follow-up. When I’m picking cotton, it’s just me and the cotton picker and the cotton. And cotton doesn’t talk back.”

Stephens said he and Gill both have to be tacticians but Gill’s work is more tedious and exacting. Navigating a monster machine down four rows of cotton is nothing like the skill required for removing a gall bladder.

“Dr. Gill’s work is so precise and when he goes to work he could have the life of a patient in his hands,” Stephens said. “That’s a lot of pressure. Too much rain or too little rain is all the pressure I want.”

Gill said although his chosen profession and Stephens’ are quite different, there are similarities that bind them.

“A farmer combines soil and seeds to make food and other things we need in our daily lives,’ he said.  “As a surgeon, I am able to help people overcome their illnesses so they can carry out their daily routines.  To me both go hand in hand.

“Both require using your hands and mind to solve problems but, in the end, you must truly have a passion for each profession due to the sacrifices that each requires.  Also both would not be successful without the good Lord.

“Rain and good weather for farming and healing for a surgeon, all of which are God’s blessings.”