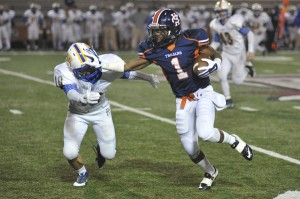 Make a tape of Friday’s game in Veterans Memorial Stadium, show it to underclassmen, and tell them this is what the definition of senior leadership is all about.

There is Austin Ingram of Charles Henderson, the senior quarterback, throwing for five touchdowns, and senior Richard McBryde scoring two TD’s out of the wildcat formation including the game-winner in overtime.

There is Beauregard senior quarterback Walker Meadows, rushing for five touchdowns and passing for another while fighting debilitating cramps most of the game.

It was the seniors of CHHS that outlasted the Hornets of Beauregard, as McBryde sprinted in from 10-yards out to give the Trojans a thrilling 48-42 Class 5A playoff win in overtime Friday night.

Beauregard had the first possession in overtime as both teams fought to a 42-42 tie in regulation, but a field goal attempt kick sailed wide left. On the Trojans first play in overtime, McBryde took it in for the score.

“We had to play defense first in overtime, and I knew it was win or go home,” said McBryde. “When we got the ball on offense and coach (Rodney) Jordan called for wildcat, I knew we had to put it in to win. We could not go back out on defense. I had to let it all out my senior year, and I did not want to go home early.”

CHHS travels to Mobile to face B.C. Rain in the second round of the playoffs this Friday. B.C. Rain defeated Demopolis 28-27.

Early in the first quarter Meadows sprinted up the middle for a 72-yard score, and the extra point by Jason Clark put the Hornets up 7-0.

CHHS answered as Ingram connected with Jalante Smith for a 43-yard scoring strike, and Ben Salmon’s extra point was good to tie the score at 7-7.

The Hornets bounced back when Meadows hit Cody Cook for a 30-yard TD pass play, and the 14-7 lead.

Beauregard went ahead 21-7 with 5:51 remaining in the first half to cap a 37-yard drive, as Meadows ran the ball in from 13 yards out.

The Trojans then mounted a rally with two touchdowns with less than two minutes remaining in the first half to knot the score at 21-21.

The first came on an Ingram 45-yard scoring strike to senior wide receiver Reilly Fox, capping a 64-yard drive. Beauregard went three-and-out on their next possession, and Ingram hit junior Nick Lewis for a 30-yard TD play, and Salmon’s extra point was good for the 21-21 halftime score.

CHHS went up 28-21 on another Ingram pass of 22 yards to Fox, but Meadows ran in from one yard out on Beauregard’s next series to tie the score again at 28-28.

Ingram engineered another scoring drive, connecting with Smith for an 11-yard TD, with Smith diving for the pylon at the goal line, and the 35-28 lead.

Later facing fourth-and-one at their own 45, McBryde lined up in the wildcat and sprinted up the middle 55 yards for the touchdown with 11:06 left in the game, and the 42-28 lead.

Both teams had the ball in the final minute but could not score, with the Trojans sealing the deal in overtime.

“I thought this game was all about our guys’ will to win,” CHHS head football coach Brad McCoy said. “This is a newly formed senior class that has gotten better each week. Only five have played together and the other 14 guys have not played football the last year or the year before. The leadership factor has steadily started manifesting itself more and more.”

Ingram finished 17-of-23 passes for 236 yards and five touchdowns. Fox had three receptions for 88 yards and two TD’s.

McBryde was the leading rusher with three carries for 68 yards and two touchdowns.

Meadows played outstanding for Beauregard in his final game as a senior, with 30 rushes for 211 yards on the ground and five rushing TD’s, and was 11-for-20 for 129 yards and one TD pass.