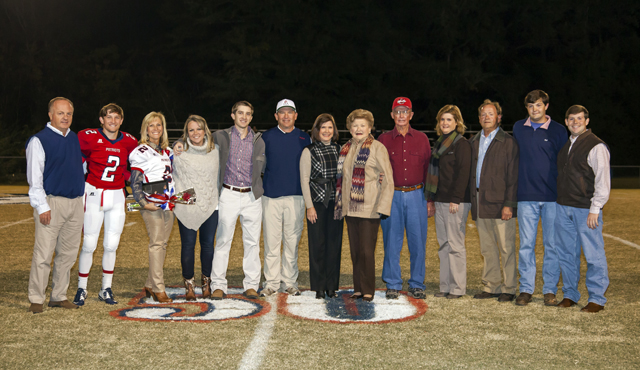 For the Hixon family, Pike Liberal Arts is more than just a school. With 14 members over three generations, the Hixons consider the school as an extended part of the family, said Kim Hixon Wise.

“We all grew up together (at Pike Lib),” she said. “It’s a small school where we were close to everybody.”

That’s part of the reason the family was honored with the True PIKE Patriot Award during homecoming activities last week.

“The True Pike Patriot Award is established to recognize annually, an individual and or collective group who exemplifies the quality of patriotism and the value those same qualities bring to our athletics program and school,” John Ramage said in a release. “The recipient reflects the positive spirit of those attributes we most closely associate with a PIKE Patriot and whose attitude and personality reflect their love of Pike Liberal Arts on the fields of competition and in life.”

Bill Hixon and Betty Hixon were high school sweethearts who married in 1957. Shortly thereafter, Mr. Bill joined the family farm and cattle operation as a third generation farmer of what is now designated as a Heritage and Century Farm while Betty, a recent graduate from Troy State, began her career in the classroom.

They also have three children who have graduated from PLAS as well as their respective spouses. Also, all seven of their grandchildren graduated from PLA with the exception of Rush Hixon, who will graduate in May 2015.

“When PLA opens the 2015-2016 school year, it will be the first time in the 45-year history of the school that a Hixon is not walking our halls,” Ramage said.

Billy Hixon said he appreciates the significant role Pike Lib has played in his life.

“(The school) means a lot to me,” he said. “Forty-five of my 50 years were spent at the school as a student, a parent or a supporter. It also means a lot to our family to have everybody attending the school. It’s a great place to get an education. I never had to worry about sending my kids there because of the safe environment.”