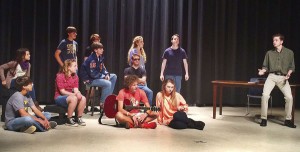 The CHHS Theater Department will present “Lakeview’s Circle” Saturday night at the school Cafetorium. The musical play was written by theater student Taylor Montgomery, far right, and received a superior rating at a theater festival in Opelika last weekend. Tickets are $5 and will be available at the door.

The theater department at Charles Henderson High School will present “Lakeview’s Circle,” an original musical by theater student, Taylor Montgomery, at 7 p.m. Saturday at the CHHS Cafetorium.
“This is the only opportunity the public will have to see ‘Lakeview’s Circle,’” said Judith Park, theater teacher. “We entered the play as a Studio Show at the Walter Trumbauer Theater Festival in Opelika last weekend and received Superior ratings.
“‘Lakeview’s Circle’ is now in the running to compete at the state level in December at Troy University. However, the public will not be able to attend the performance at the University so Saturday night is a one-time chance to see the show.”
Park said the idea for the musical originated with Montgomery during the summer.
“Taylor contacted me about writing a musical play to be performed this fall,” Park said. “Over the summer, he would write and send it to me and I would review and edit the script and send it back. It was a collaborative effort and we were both pleased.”
When Park inquired about entering the “Lakeview’s Circle” in the Trumbauer Theater Festival, she learned that the play could be no longer than 30 minutes.
“We had to cut 15 minutes off ‘Lakeview’s Circle’ and that was good because it gave us more time to focus on acting,” Park said. “The play includes four musical numbers and I believe everyone will enjoy seeing these students actors on stage.”
Park said that “Lakeview’s Circle” tells the story of high school seniors overcoming stereotypes in order to complete an end of the year project that brings them closer together than ever before.
Students who received superior ratings in individual and partner events at the Festival include Krishna Patel and Timea Neal, classical scene; Krishna Patel, classical monologue; Raquel Cole, comedic solo; Jocelyn Jointer, comedic solo; Raquel Cole and Jocelyn Jointer, comedic duet; Nelsey Leverette and Abigail Salmon, comedic duet; Quashanta Billups, dramatic monologue; Ethan Montgomery, comedic monologue; Laura Cain, comedic monologue, Stephen Cooper, playwriting; Ethan Montgomery and Stephen Cooper, comedic scene; All Star Cast, Ethan Montgomery and Amelia Steele; best supporting actor, Ryle Williamson; and Studio Show, “Lakeview’s Circle.”