Charles Henderson prepares for their first round playoff duel with Beauregard 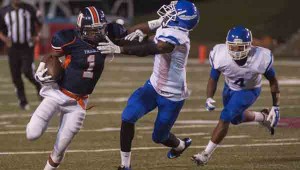 Some teams in the AHSAA may host a cupcake in the first round of the state playoffs, but Charles Henderson High had no such luck, as they host Beauregard of Opelika this Friday in Troy’s Veterans Memorial Stadium.
Beauregard enters Friday’s 7 p.m. contest at 7-2 overall, and ended the year in a Class 5A, Region 3 deadlock with Clay County-Central and Tallassee with a 5-1 record.
Demopolis is the number-one seed in their part of the bracket, while CHHS is the second seed, Beauregard is third and B.C. Rain is the fourth seed.
CHHS head coach Brad McCoy said these seedings are definitely misleading.
“Beauregard could very easily be the number one seed,” said McCoy. “Once we got video on Beauregard, it is understandable why they are in the playoffs. Their offensive line is their strong point, they are big, and they have great skill guys.
“They are a lot like Auburn on Saturdays. They run their offense up-tempo with a no-huddle, or they will huddle and break the huddle fast, getting to the line of scrimmage and snapping the ball.”
CHHS will bring a 7-3 overall record into the playoffs under McCoy, in his first year as head coach for the Trojans.
Last Friday, the Trojans had their six-game win streak snapped when Class 6A Northview took a wild 41-34 win.
“If you look back to the Northview game, we lose by a touchdown and had a chance to win it on the last drive,” said McCoy. “There were four to five critical mistakes all happening to us, and we still had a chance to win it. We would like to believe that if we can eliminate the big mistake and big play, then we like our chances.”
The Trojans will lean on their seniors, including Austin Ingram at quarterback, who has passed for over 2,000 yards as a sophomore, again as a junior, and stands at 1,831 yards this season with 23 TD passes.
Jalante Smith has 48 receptions and 10 touchdowns.
Mondaris Dixon has rushed for 946 yards and 11 touchdowns, while Jared Wilson has picked up 223 yards.
Senior linebacker and Auburn commitment Richard McBryde leads the Trojans in tackles with 120 and six sacks, while Lorenzo Pennington has 7.5 sacks. Marquis Simmons has four interceptions and 80 tackles on the year.
“Beauregard is going to be sound,” said McCoy. “They are just a good football team. They do a lot of things well. This Friday night will come down to who can come out and eliminate those mistakes.”