Troy 18-under soccer qualifies for state 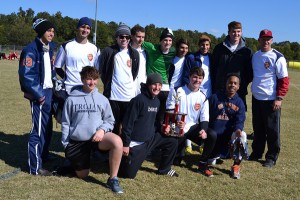 The Troy 18-under recreation soccer team advanced to state with its victories Saturday at Districts in Eufaula.

The team competed in a round-robin tournament, with the winner advancing to the state championship tournament.

The team defeated both Eufaula and Dothan.

The state tournament will be held Nov. 15 and 16 in Opelika.

Three other area soccer teams were in action last Saturday as well.

The Troy 9-under team played Dothan Red in Troy Saturday, but lost.

The Troy 11-under team secured a first-round by in districts, but were defeated at the tournament in Dothan.

And the Troy 13-under team fell to Andalusia at the district tournament in Dothan.