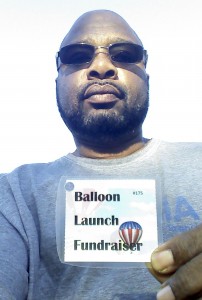 James Wilson of Macon, Georgia, was skeptical when he saw a yellow balloon in his yard, but he soon learned that balloon won him a $100 in the Troy Rotary-PIke Medical Foundation fund-raiser.

Three of the 250 yellow balloons entered and released in the Troy Rotary-Pike Medical Foundation Great Balloon Race were found and reported before the 10-day race ended at midnight Sunday.

The winning balloon No. 175 was found by James Wilson of Macon, Georgia. Wilson will receive $100 for finding and reporting the balloon that traveled the greatest distance from Troy.

Two other balloons were found, one in Eufaula and the other in Dawson, Georgia.

Wilson said he saw something yellow in his backyard on Tuesday.

“I just thought it was something the squirrels had brought in the yard,” he said. “I didn’t go out there to pick it up until the next day.”

Wilson read the Balloon Launch Fundraiser tag but thought it was a joke.

“At first, I thought it was some kind of gimmick,” he said. “There are all kinds of gimmicks that go around so I didn’t think much about it. I just took the card off and put the balloon in the trashcan.”

But, on the outside chance the tag might be “for real,” Wilson decided to call the telephone number on the back of the card.

“I was real surprised to find out that it was not a gimmick and that I might have a chance to win one hundred dollars,” Wilson said. He was even more surprised to learn Monday that he was the winner.

Wilson designed kitchens and bathrooms but had to retire due to health reasons.

“So, I can always use one hundred dollars,” he said. “I’m going to use the money to put gas in my truck and take a trip to Virginia to see my son. He won’t believe that the money just fell from the sky.”

The funds raised through the Great Balloon Race will be used to refurbish the Troy Regional Medical Center emergency room waiting area.

Karen Herring, TRMC marketing, expressed appreciation to the Troy Rotary Club and the Pike Medical Foundation for their support of the hospital.

Two hundred and fifty balloons were entered in the race at $100 each. The Troy Rotary Club has applied for a grant from Rotary International in support of the fundraiser.