CHHS loses in nailbiter to Northview 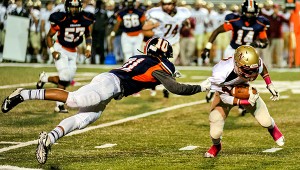 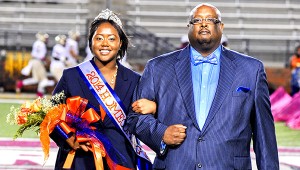 The Northview High defense turned away a last-second Austin Ingram pass in the end zone as time expired, sealing a dramatic 41-34 victory over the Trojans of Charles Henderson High Friday night in Troy’s Veterans Memorial Stadium.

Northview led the Trojans early 13-0 and later 24-7, but CHHS staged a number of comebacks to cut the lead to 31-28 in the second half.

But the Cougars never surrendered the lead on the evening of Charles Henderson High’s homecoming.

The Trojans slipped to 7-3 to conclude the regular season while Class 6A Northview ends their year at 5-5. CHHS will host the first round of the Class 5A playoffs next Friday against Beauregard High School, who are 7-2 overall this season.

“I don’t think you could have asked for a better football game, from a fan perspective,” said CHHS head coach Brad McCoy. “It was a fun football game to watch. When you look at what we did, things that had not happened all year long happened tonight. The only thing I can hope we can take from this game is that I hope it helps us in the playoffs.

“All the different situations, coming from behind, playing the clock, having to play hurry-up, facing adversity, all the special team things that happened. But our players, they showed me they would not stop. They will not quit. There is not any quit in them.”

Northview drew first blood with a 49-yard drive on their opening series of the first quarter, as sophomore running back Elijah Rojas busted a 25-yard run for a touchdown, and the attempt for the 2-point conversion was no good, giving the Cougars a 6-0 lead.

The Trojans were forced to punt on their next possession, but Jalante Smith was unable to get the kick off, scrambled to his right and a desperation pass attempt was intercepted by the Cougars, giving them possession at the CHHS 18.

On the first play, Whitlow lofted a pass in the left corner of the end zone for a touchdown to Johnny Williams III, and the extra point by Cody Neeman was good for the 13-0 lead.

CHHS got on the board on their next possession, when on third-and-one from their own 29, senior Richard McBryde took the snap in the wildcat formation, and sprinted around the right end for a 71-yard touchdown carry. The extra point by Ben Salmon was good, cutting the Northview lead to 13-7 with 6:17 remaining in the first quarter.

The next score for the Cougars came when Neeman, a junior place kicker, drilled a 48-yard field goal as time expired in the first quarter, giving Northview a 16-7 advantage.

Desmine Ogburn broke a 19-yard run for the next Northview score, and a 2-point conversion pass to Benjamin Dowd was good, giving the Cougars a 24-7 lead.

Charles Henderson rallied for two quick touchdowns to open the second half, with a swarm of Trojan defenders rushing a Northview fourth-down kick and blocking the punt, with McBryde scooping up the loose ball and sprinting 26 yards for the touchdown. Salmon’s kick cut the lead to 24-14.

The Cougars were forced to punt on their next possession, and the Trojans moved 57 yards in six plays. Ingram connected with Mondaris Dixon for a 7-yard touchdown pass, and the extra point hit the upright and was no good for the 24-20 Northview lead with 6:04 remaining in the third.

Northview wasted no time scoring, as Whitlow hit Williams for a 77-yard pass play to the Trojan 3-yard line, and two plays later, Whitlow took the ball in for the 31-20 lead.

CHHS answered with a touchdown as Ingram connected with Jalante Smith for a 25-yard gain to the Cougar 36.

And two plays later, Dixon juked and jived in for a 12-yard TD run. Ingram then passed to Jared Wilson for the two-point conversion, cutting the margin to 31-28 with 2:26 left in the third quarter.

Jaleen Thomas scored for Northview in the early moments of the fourth quarter on a 3-yard carry, and Neeman nailed a 27-yard field goal to extend the Cougars’ lead to 41-28.

CHHS then marched 80 yards in six plays, with Smith making a sensational one-handed catch in the end zone from an Ingram pass for the touchdown, and with Northview blocking the PAT, the score stood 41-34 with 5:59 remaining in the game.

The Trojans got the ball two more times late in the fourth quarter, but could get no closer to the Northview 14 with :02 seconds remaining, but could not score.

Ingram was 25-of-45 for 282 yards, one TD and one interception, while Smith had 123 yards on eight receptions.