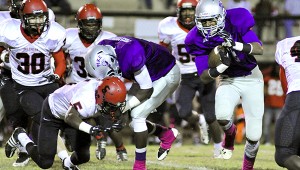 There are no guarantees when it comes to regional play regardless of record, and the Pike County Bulldogs were reminded of that last Friday with a 13-12 loss to the Daleville Warhawks.

While the loss could be a turning point in the season, instead coach Fred Holland has his team back on track for a road trip to play the Bulldogs of Washington County.

“We’re actually focused on Washington County,” Holland said. “A couple mistakes last week prevented us from doing what was needed in order for us to be victorious and Daleville played us extremely tough. We’ve got a tough game this week, and it’s a long ride there and back. We’ve had a good week of practice and guys are staying positive and doing their job.”

Luckily for Pike County, their mistakes didn’t cost them the second seed in Class 3A Region 2, and assuming they make it deep enough into the playoffs this over three hour trip could serve as a trial run for heavy travel in later rounds of the tournament.

“It definitely gives us a chance to see how we do on a long road trip,” Holland said. “I look forward to it. I think it can really help us because if you’re going to move forward in the playoffs the first thing you have to do is win, the second is you’re going to have to travel.”

After running through a regional gauntlet over the last month, some coaches would consider sitting key players for rest in preparation for a playoff run, but that thought process doesn’t cross Holland’s mind.

“Football is a violent sport and things are going to happen,” Holland said. “I don’t put a lot of emphasis on people getting hurt, I emphasize on playing hard, playing smart, and doing the things we need to do to be successful. We will go into this game the same as we have any other game; to win.”

Winning against the Warhawks was definitely the emphasis of last week’s game plan despite the tough loss.

While finishing out the region with a strong win over Daleville obviously would have been the preferred order of things for Pike County, there still could be a silver lining in the defeat.

“Well it definitely humbles you,” Holland said. “It reminds you not only that you have to prepare well, but you have to execute. Daleville was a great team but we failed to execute against them, so we just have to continue to work on ourselves and keep improving.”

Part of that is keeping the team’s attention on Washington County.

In many ways, this game will be a playoff-like atmosphere for Pike County, but Holland hasn’t used the “P” word much with regular season games left to play.

“I haven’t talked much about the playoffs,” Holland said. “I talked to them about finishing the regular season off the right way. Washington County is definitely a great team that we have to be well prepared for and you have to come out and play the right way.”

In fact, Holland sometimes spends so much time preparing for opponents that he loses track of exactly who it is they will be facing.

“I’m not looking at names or whatever it might be,” Holland said. “I’m trying to be ready in all phases of the game.”