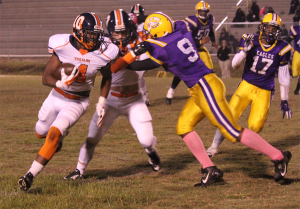 Three games into the 2014 campaign, Charles Henderson High found themselves standing 1-2 overall, and at an important crossroad in the season.

This Friday, the Trojans, winners of six-straight and having earned the right to host the first round of the Class 5A Alabama High School Athletic Association state playoffs, will host Class 6A Northview of Dothan in a non-region contest, which will also serve as Senior Night and Homecoming for CHHS.

CHHS enters the contest 7-2 overall, while Northview stands at 4-5.

Trojans head coach Brad McCoy knows that Northview has always been an athletic, physical opponent, and this Friday’s matchup is an important challenge before the playoffs begin.

“Homecoming is a special time for a lot of people, seeing old friends, and many people coming back,” said McCoy. “Like I told the team, that is fine, that is part of what homecoming is, but we have a football game to play. We have a week to get ready for this bigger, athletic team coming in. We can not get caught up in everything going on. I am glad our school does this on a daily basis, but we have to be careful.

“In their (Northview’s) mind, their source of motivation is they know they have had losing seasons the last couple of years, and they have a chance to be 5-5 even though they will not make the playoffs. That is probably what they are going to use to get their guys going this week. There is a history behind Northview and Troy.”
Although McCoy is in his first year as head coach at CHHS, his team did see Northview this summer.

“We faced them in 7-on-7 competition this summer, and they wore us out,” he said. “They have a great quarterback, a great running back and big, tall receivers, not to mention their offensive line is big and physical. This is their last football game of the year. They don’t’ have anything to lose.”

The Trojans began the season with a win over Daleville, then dropped consecutive games to Dale County and Greenville.

From that point, McCoy said, the seniors took command of the direction of this team.

“There was a time when we were at a crossroads, and we could have went either way,” said McCoy. “Austin Ingram, Richard McBryde, Marquise Simmons and Duke (Jalante) Smith, these guys stepped up and said, ‘This is who we are, this is how we have got to prepare,’ and along with the help of the coaches, we got things headed in the right direction. Our players, whether it being the guys coming back, or the guys that are brand new, they all have a lot of pride at this school.
“They saw and sensed their backs against the wall when we started 1-2. Playoffs are never easy. Even though this game against Northview is not a region game, you look at it in two ways. You go in and win, and you have motivation going into the first round. You go into it and you don’t win, then you have to worry about a letdown, and get guys back up and ready for the playoffs. We have not mentioned non-region, we call it the next one.”

The first round of the playoffs will be held in Troy, against either Beauregard, Clay County-Central or Tallassee. One of those three teams will face CHHS a week from Friday.

This week’s Homecoming festivities begin Thursday with a tailgating event on campus at 4 p.m. The CHHS Homecoming parade will be held on the square in downtown Troy at 3 p.m. Friday, and Senior Night events begin at 6:30 p.m. before kickoff at 7 p.m.