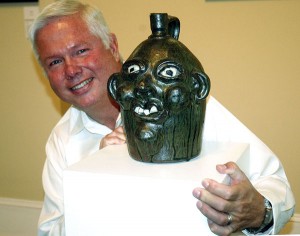 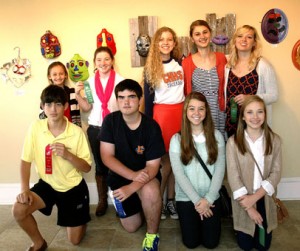 The winners in the Face Jug Fright Arts Awards were invited to attend the Dr. Robert Gilliam’s Artist’s Talk at the Johnson Center for the Arts Wednesday. Pictured front, from left, Holt Steed, Brandon McCain and Ava Smolcic. Back, Hanna Broaderway, Gracie Sneed, Alex McLendon, Lizzie Orlofsky and Kelsey Foster. The student’s artwork is on exhibit in the Tile Gallery at the Johnson Center.

Dr. Robert Gilliam admits that he is not an artist but he loves art.

As a face jug collector art, Gilliam told those gathered for the Artist’s Talk at the Johnson Center for the Art Wednesday that he might be thought of as a little peculiar.

“I looked up the meaning of peculiar and it means strange, odd, bazaar, unusual and I thought that might apply to me,” Gilliam said laughing.

While odd, strange or whatever term is used to describe face jugs and, perhaps, even those who collect them, Gilliam said the history of face jugs is fascinating.

“Face Jug” is a term coined by historians that refer to an African American pottery type created in the second half of the 19th century, in the midst of slavery, around Edgefield South Carolina.

“The first face jugs were made by African slaves,” Gilliam said. “It is believed the face jug art was influenced by the slave culture including, both voodoo and Christian.”

“Slaves were not allowed to have gravestones, so face jugs were often used to decorate graves. The ugly faces where thought to scare the devil away.”

“Face jugs had utilitarian use such as churns and vessels to carry water and sometimes, moonshine,” Gilliam said. “The ugly jugs would keep children away.”

Although face jug art is peculiar or whimsical or downright ugly, Gilliam said it is nonetheless art and all art is about the soul of the artist.

“Theodore Dreiser said art is the stored honey of the human soul and that is evident in face jug art,” he said.

The winners of the Johnson Center’s Face Jug Fright Art Award attended the Artist’s Talk and Gilliam encouraged the students to continue their artwork and to be passionate about it.

“All art comes from the soul,” he said. “Whether you do art or collect art be passionate about what you do.”

Vicki Pritchett, Johnson Center executive director, said Gilliam’s talk was perfectly designed for an artist’s talk. She expressed appreciation to him for enlightening members of the community on face jug art and for a very inspiring talk.

“We can’t all be artists but we can all be knowledgeable about the different kinds of art,” Pritchett said. “Those who attended Dr. Gilliam’s talk know more about face jug art and are better able to understand and appreciate it.”

Pritchett offered congratulations to the winners of the Face Jug Fright Arts Award and to the teachers who encouraged and motivated students to enter their artwork.

“All schools in Pike County were invited to participate in the Face Jug Fright Art Competition,” she said. “We had students from the elementary, middle and high schools in Troy, Pike County High School, Pike Liberal Arts and Covenant Christian as well as home schooled students.”