Nine and under soccer heads to district play 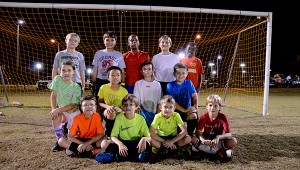 The rec league season has made its way into playoffs and districts, and Troy will have four rec league soccer teams competing for the different age groups.

Head coach for the 9 and Under team Bobby Templin said although the team hadn’t spent the whole season together, the team had been practicing together for the last week.

“We’ve not played in any matches or games yet, because we’re a combination of three teams we had in this league,” Templin said. “We’ve been practicing since last week. It’s been going well, and everyone is excited to play in the district tournament Saturday.”

Templin said the team would be working on basic soccer drills to ready for their match Saturday.

The 9 and Under team held a friendly contest against the 11 and Under team Tuesday at the Sportsplex. Templin said it was a great time for both teams to be able to get experience of playing a real-time game situation with their team and see a team that’s of a different caliber.

The 9 and Under soccer team will play Saturday, Nov. 1 at the Troy Sportsplex with kickoff slated for noon.