Trojans fall to South Alabama, look ahead to Georgia Southern 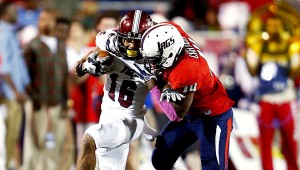 The loss was Troy’s seventh on the season and marked the first time the Trojans had lost to South Alabama.

Monday morning, head coach Larry Blakeney was complimentary of the Jaguars in defeat.

“I was real impressed with South (Alabama) going in,” Blakeney said. “They’ve developed a pretty good bank of personnel down there. Our kids fought them pretty hard, thought we had a chance, couldn’t quite get it done.”

The Trojans’ downfall Friday, much like two weeks ago to Appalachia State, was defending the running game.

And Thursday’s matchup with Georgia Southern won’t be any easier.

The Eagles, who currently sit in first place in the Sun Belt, are the number one rushing team in the country.

“It leads off the triple option, out of every formation and motion,” Bolt said. “It’s a wishbone mentality with a power running game, which makes it hard to defend.”

Offensively, the Trojans were so-so Friday night, gaining 309 total yards. But the offense settled for just one field goal in the second and third quarters, after driving into South Alabama territory numerous times.

To make matters worse, starting quarterback Brandon Silvers left late in the game with a back injury.

Troy offensive coordinator Kenny Eddenfield said Monday that the struggles of the Trojans’ offense had much to do with not being able to take advantage of the opportunities they were presented, rather than Silvers’ struggles.

“I don’t know that he struggled as much as we didn’t make some plays for him when we had the chance,“ Eddenfield said. “Really, third down was the main issue if you go back and watch it, which we did. What we had called was there we didn’t execute it all the time.”

Troy faces yet another quick turnaround as they prepare to visit Georgia Southern on Thursday night.

Blakeney said two short work weeks in a row is taking its toll on players.

“Play on Friday night, play on Thursday night. Play in Mobile and play in the Atlantic Ocean,” Blakeney said. “I just know what kind of wear and tear it has on kids and old people like me.”

But even with a record of 1-7 on the season, players are still motivated as ever to win and finish strong in Blakeney’s final year.

“It’s still the game we love,” Troy wide receiver Chandler Worthy said. “We can’t get down and pretty much give up the rest of the season. We’ve still got four games in front of us, so we have to go out there and give it our all every game.”