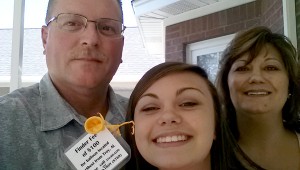 Bob and Tammy Rajala, pictured above with their daughter, were the first to report finding one of the yellow balloons launched Friday by the Troy Rotary and PIke Medical Foundation as part of the Great Balloon Race. The family found the balloon in Dawson, Ga.
SUBMITTED PHOTO

Two balloons entered in the Troy Rotary-Pike Medical Foundation’s Great Balloon Racer were found and reported Monday. One was found near Eufaula and the other at Dawson, Georgia.

The Great Balloon Race fundraiser to benefit Troy Regional Medical Center got off to a high-flying start around 4:30 p.m. Thursday and will end at 4:30 p.m. Sunday.

The balloon found the greatest distance from Troy will be declared the winner and the ticket holder of that balloon will win $1,000. The individual who finds and reports the winning balloon will receive $100.

Tammy Rajala called The Messenger around 2 p.m. Monday to report that her husband, Bob, had found the yellow balloon number 155 on his hunting land near Dawson, which is about 109 miles from Troy.

“The ironic part was that it was the anniversary of my mom’s passing,” Bob Rajala said. “I sat in the deer stand and asked her to shine down on me. I didn’t see any deer after sitting for four hours and went around to the different deer stands to check on them and hang curtains.”

Rajala said the stand he went to last had been moved from its previous spot.

“As I was hanging curtains, I looked around and saw something,” he said. “I wondered what it was and thought somebody had dropped something. So, I walked about 10 feet from the stand and I saw a frayed yellow piece. I picked it up and read it and thought, ‘wow,’ maybe mom is looking down on me.”

Cordara Robertson reported that his dad, Cleveland, found a yellow balloon “popped up in a tree.”

“My dad works at a lumber company in Louisville but we live about five minutes from Eufaula,” he said. “I don’t know much about how he found it except it was in the trees.”

About 250 balloons were entered in the race and Herring said it’s very likely that not all of them will be found or reported. And, the balloon that travels the greatest distance may be among those not found.

The funds raised through the Great Balloon Race will be used to refurbish the TRMC emergency room waiting room.