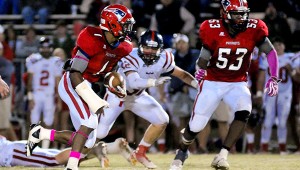 Head coach for the Patriots Gene Allen has said all season the team’s goal was to reach the playoffs, and he said he was excited for his team following the win over the Eagles.

“I’m just happy for the seniors,” Allen said. “We have four or five of them that it’s been a long three years. I’m real proud for them. We came out and played a complete game tonight. We played real well. I’m just excited for them and glad we’re in the playoffs.”

The Patriots came out of the gate early, scoring two touchdowns in the first quarter, one from JaMichael Jones and another by Jeremy James.

The Patriots’ 14 points did not go unanswered, however. The Eagles scored once in the second quarter, but the half ended with the Patriots leading 14-7.

The Patriots were able to hold off the Eagles, scoring 15 unanswered points in the third quarter. The Eagles scored twice in the fourth and were able to make good on a two-point conversion, but the Eagles still fell short to the Patriots.

Jones remained humble after Friday’s victory saying he “owed it all to my line.”

“The fullbacks made good holds so I could cut through,” Jones said.

This will be the first trip, for several of the seniors, to the playoffs. Jones said although he was a junior it was still just as monumental to him as the seniors.

“I think it’s a very special moment,” Jones said. “I look up to those guys, these guys have never had a playoff game a day in their life and now they’ve got one. I want to be just the same way.”

According to Allen, if you were to look back two seasons ago, the Patriots had barely enough team members to get through a game, but quarterback Rush Hixon said the team had come a long way since his sophomore-year season.

“It was definitely something more,” Hixon said. “You start off every season out with state championship aspirations but as that goes on you set smaller goals. Playoffs was a smaller goal, getting past our hump of only two wins last year was a goal. Of course, a state championship is our main goal, and we still are in line for that.”

The Patriots did not have to work too hard Friday, but many of the players still saw action with Jeremy James accounting for 13 tackles. Tyler Hussey and Drew Starling who each had 10 tackles followed James closely.

After losing to the Eagles two years in a row, Allen said it was nice to finally “get one back on them.”

The Patriots had a more intense week of practice than normal this late in the season, but Allen said he thinks the momentum from practice was visible in the game.

“We had a lot more physical practice than we normally have this late in the season, because we had some stuff we had to work on,” Allen said.

Earlier this week, Allen referred to the game as a “must win” situation, and looking at this past week of practice Allen said he knew the team would come out ready to play against Fort Dale.

“With this being a big game, a region game to get us into the playoffs, I knew our kids would come out ready to play,” Allen said. “I was just scared they were going to be a little too up coming out, but they did well and controlled their emotions.”

The Patriots will host Asford next week for homecoming and senior night with a 7 p.m. kickoff.