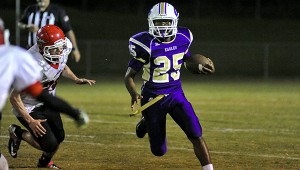 The Goshen football team and head coach Bart Snyder are proving their doubters wrong, one game at a time.

After securing a home playoff spot with a dominating 24-7 victory over Region 3 rival Zion Chapel and improving to 6-3 overall on the season, Snyder remembered how he had been told his team would never win a game this year.

“Nobody thought we’d be where we are right now. Nobody,” Snyder said. “I had an old man tell me one time — my dad — back against McKenzie that we wouldn’t win a ball game. And we did. We won several.”

And Goshen’s latest victory Friday night was extra special, as it guaranteed the Eagles a home playoff game in the first round of the post season.

The win, as Snyder described it, was a complete team victory.

“We’re very proud of our guys tonight,” Snyder said. “This is special for Goshen.”

For the first half Friday night, the story of the game was the stout Goshen defense.

The Eagles (6-3, 5-2) held Zion Chapel (1-8, 1-6) to a three-and-out on the game’s opening possession and allowed the Rebels to cross midfield just once in the first half.

The Eagles’ offense, however, had to endure some early miscues.

On their first offensive possession, the Eagles withstood several early penalties and a strip-sack before ultimately capping their drive on a nine-yard touchdown run by running back Jabronski Williams, putting the Eagles up 7-0.

And offensive issues continued to plague the Goshen through the end of the half.

Going into the locker room up 10-0, the Eagles managed just three points in the second quarter and committed six penalties in the first half.

“We didn’t execute several plays early,” Snyder said. “We have to go back to work and fix some things that will lead us to be successful late in the playoffs.”

But the Eagles’ offense bounced back from a rough first half, scoring on their first drive of the third quarter when quarterback Kendrez White connected with wide receiver Zachery Alford for a 50-yard TD pass.

White, who finished 7-12 for 112 yards and a TD in the game, gained confidence in the second half, completing five of his seven pass competitions after halftime.

The Eagles iced the game early in the fourth quarter when running back Terrianno Griffin took a handoff 72 yards for a score, putting Goshen up 24-0. Griffin finished the game with 109 yards rushing and one TD.

In a losing effort, the Zion Chapel defense forced four Goshen fumbles — only one of which was recovered by the Rebels — and were able to cause some confusion for the Goshen offense. Head coach Bradley Bowers said he was proud of the way his team competed Friday night.

“We played very well at times,” Bowers said. “We had some missed assignments, but overall I was really proud of how they got after it and was proud of their effort. I was proud of the way they competed.”

For Snyder, there is still a lot to improve on for this Goshen team as they look forward to a matchup with Brantley next week and ahead into the playoffs.

But on Friday night, Snyder was only thinking about one thing — bringing the playoffs home to the Goshen fan base and community.

“These fans here at Goshen and the support they give to us is great,” Snyder said.