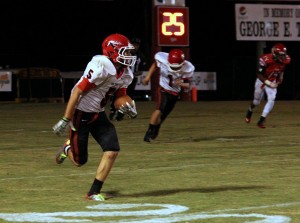 In the mind of Zion Chapel head football coach Bradley Bowers, there are two kinds of people in the world: race horses and plow mules.

Race horses, he said, are fast and look pretty. They get to the finish line quickly and everyone loves them. They’re the flashy favorites.

But the world needs plow mules, too.

“People need plow mules,” Bowers said. “They are steady, and get the job done.  People look down on them, but they are workhorses.”

And that is exactly the lesson Bowers is impressing on his football team this year.

Zion Chapel (1-7, 1-5) is struggling up to this point in the season. The Rebels find themselves undersized and outmatched by just about every opponent they’ve faced this year. And with so much youth on the team, finding a victory in the stacked Region 3 is often a tall task.

But for Bowers and his team, the road to success is a journey, not a race. And that journey continues as the Rebels visit Region 3 rival Goshen on Friday night.

The Eagles (5-3, 4-2) are in position to control their own destiny against the Rebels. With a win, Goshen can secure a home playoff game later this season.

But finding themselves again outmatched and undersized by a speedy Goshen team, Zion Chapel can play the role of spoiler for the Eagles. And that is a role Bowers said his team would relish.

The scenario, Bowers said, is much like one Zion Chapel found themselves in in 2011 when the Eagles had a similar chance to ruin the Rebels’ playoff aspirations.

“Three years ago we were in a very similar situation,” Bowers said. “We were at Goshen.  If we won, we had a home playoff spot. If we lost, we could be eliminated from the playoffs altogether. We won and we secured the two seed.”

Zion Chapel will look to produce those same results Friday when they visit Goshen. But in order to do so, the Rebels will have to eliminate the big plays and be able to execute their own game plan properly.

Bowers said he is expecting Goshen’s athletes to get off to a fast start, and the Rebels will have to survive the Eagles’ early fury and keep moving forward.

“Goshen is very fast, just like 99 percent of the teams this year that we have faced,” Bowers said. “We are going to try to run straight at speed. That’s how you combat it.”

In addition to limiting big plays, Zion Chapel will look to force Goshen to turn the ball over and make mistakes, which the Rebels can capitalize on. Forcing those mistakes will be key in keeping the game even, as Bowers sees very few weaknesses on the Goshen side of the ball.

“They (Goshen) are just so athletic and that is going to hurt us,” Bowers said. “It is hard for us to find weaknesses that they have. When we were breaking down film, they are well coached and we are going to have to hope that they make some mistakes.”

Zion Chapel will look to implement that game plan behind what Bowers considers to be strong senior leadership on the team.

And his message to those seniors was simple: finish strong.

“We had a real good talk to our seniors, and we’re trying to finish strong,” Bowers said. “The underclassmen are going to play hard for the seniors. Seniors are going to provide leadership so underclassman can have momentum going into offseason.”

That momentum is all part of the ever-important journey the Rebels find themselves on. And that journey, Bowers said, is what makes the tail end of the season so important for the Rebels.

“We know where the finish line is, and we have to make sure that we plow and plant our seed and reap what we sow next year.”

Tigers take a bite out of Zion Chapel