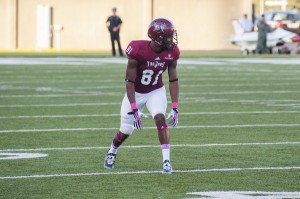 Troy senior wide receiver Kinderick Dent once considered walking away from the sport of football completely.

Dent, then a walk on wide receiver at the University of South Alabama in 2011, dropped out of school because of poor grades and left the football team without ever playing a snap.

The Mobile native and LeFlore High School graduate left school and picked up a job working at a senior care facility, far from the familiar confines of the gridiron.

Dent said his time spent employed there was enjoyable.

It taught him to respect his elders. But in the back of his mind, he knew he had to go back to school. This couldn’t be where he would spend the rest of his life.

“I was so ready to come back to school,” he said. “The money was nice, but I wanted to have a real job instead of just sitting with patients.”

It was there that Dent decided he would re-enroll in college courses.

But still, playing football was out of the picture.

That is until he cared for a patient by the name of Bert Milling Sr.

Milling, a former defensive and offensive lineman for the Philadelphia Eagles in the 1940s, got to know Dent well. And he knew Dent’s story about walking away from the sport.

Every day, Milling would talk to Dent about football and challenged him to return to the sport he once loved.

“He actually challenged me every day to do about a hundred pushups,” Dent said. “He wanted me to go back so bad.”

It was because of Milling that Dent decided to go back to school and returned to college football.

But after experiencing issues with grades and other distractions in his first stint of college in his hometown of Mobile, Dent decided to enroll away from home at Troy University.

He hoped the change in scenery would provide him with the fresh start he was looking for.

“I was at home and I didn’t really do what I was supposed to do,” Dent said. “Once I got away, I got right back on track here at Troy.”

Dent enrolled at Troy in 2012 and tried out for the team in 2013. By Spring of that year, he was a member of the Troy Trojan football team.

Now, Dent will have some extra motivation to perform as he heads home and Troy heads to Mobile to face South Alabama on Friday.

Troy (1-6, 1-2) will face a dangerous South Alabama team averaging 407 yards of offense on the year.

The Trojans will have their hands full with the Jaguars’ (4-2, 3-1) offense, lead by electrifying dual-threat quarterback Brandon Bridge.

“He looks like Cam (Newton) to me,” Troy defensive coordinator Wayne Bolt said. “When he gets into the open field, he’s very dangerous. He is a dual-threat running and throwing the football and they do a great job with him.”

In addition to their dangerous senior quarterback, the Jaguars boast a running game ranked 41st in the country and are averaging 197 yards a game on the ground.

Bolt said it would be imperative for the Trojans’ defense to play disciplined and force the South Alabama offense into uncomfortable positions.

“We have got to get them into third-and-long and get a chance to get our defense off the field,” he said.

The Trojans tallied four sacks and two turnovers two weeks ago against New Mexico State, but were held to zeroes in both categories last week against the Mountaineers.

“When they (the players) do what they’re supposed to do, we have success,” Bolt said. “We have to have a total team effort in the run, pass and the whole deal. Play solid defensive football.”

Offensively, Troy will look to bounce back from a performance last week that saw them gain just 79 yards rushing and 309 yards of total offense.

Offensive coordinator Kenny Edenfield said that re-establishing the run game against the Jaguars would be the offense’s first priority on Friday.

The Trojans will also want to re-establish quarterback Brandon Silvers as a running threat, Eddenfield said.

Silvers, who ran for 85 yards and a TD against the Aggies, was much less effective last week versus a stout Appalachian State defense, as he was held to -7 yards on the ground on 11 rushes.

Eddenfield said the Mounaineers did a good job of taking the perimeter away from the Trojan run game.

This will mark the third meeting between the two schools in what is widely being considered a budding rivalry.

“It’s going to be a tough fight, the rivalry is growing more and more each year,” senior wide receiver Chandler Worthy said at the Trojans’ Monday press conference. “We know that they’re going to come out to play, especially since they felt like they had it last year and gave it away.

“We have to come out ready to play. This team wants to beat us and beat us bad. They want to kick us while we’re down. In about two or three more years it is going to be our number one rivalry.”

The Trojans will look to make it three-straight Friday in Mobile.

Eddenfield, who says he hasn’t gone back and watched Thomas’s game-winning catch from last year, said what Thomas did last year is exactly what he is looking for again this year — for someone to step up and make a play.

“That’s what it boils down to when you play against people,” Eddenfield said.

“Somebody’s gotta step up and make a play.”