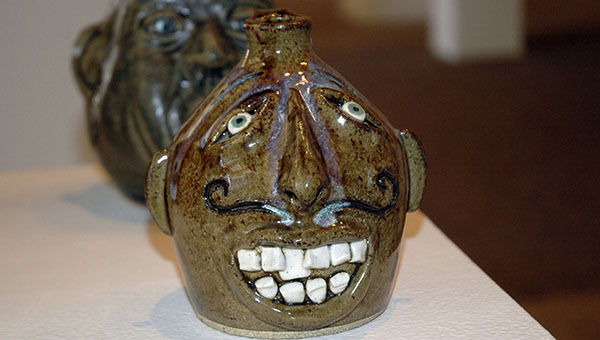 The collector whose face jugs are on display at the Johnson Center will present an art talk at 11 a.m. Wednesday.

It’s time to get face-to-face with some unusual art. The Johnson Center for the Arts will host a Face Jug Art Talk at 11 a.m. Wednesday at the art center and everyone is invited.

Dr. Robert Gilliam, a physician with SARHA, will be the featured speaker and his talk will be on his extensive face jug collection.

“This is a special opportunity for the community to view a wide variety of face jugs that Dr. Gilliam has collected over the years and from his many travels,” said Walter Black, Johnson Center exhibition coordinator. “The history of face jugs is very interesting, as well as Dr. Gilliam’s stories related to his face jugs. It’s neat that face jug art has survived and is being produced today. The early face jugs were functional, now they are being produce for aesthetics.”

“Dr. Gilliam’s collect represents different cultures and the jugs have their own personalities,” she said. “You look at the jugs and wonder where they jugs came from and why they were made and what they represent.

“I am so anxious to hear Dr. Gilliam’s talk because I want to know more about the history of the face jug and about the ‘faces’ in his collection.

Pritchett said face jugs date back to the second half of the 19th century in the midst of slavery around Edgefield, South Carolina.

“Most scholars agree the first face jugs were made by African slaves who worked in pottery factories,” she said.

And, there’s also a tie to moonshiners or bootleggers.

“Around the early 1900s, bootleggers depended on potters to provide them with non-transparent jugs for their whiskey,” she said. “The ugly face jugs were made to the potters to show their support of Prohibition while, at the same time, providing jugs for the bootlegged whiskey.”

Gilliam will provide greater insight into the history of face jugs and personalize his collect with stories and details of the artwork. His collection contains the work of some of the most popular and well-known face jug artists.

“Dr. Gilliam’s talk will introduce us to the face jug culture and a form of folk art that is growing in demand,” Pritchett said.

The Face Jug Exhibition at the Johnson Center for the Arts will close on Nov. 5 so the window of opportunity is small. The Face Jug Fright exhibit is a companion exhibit featuring the artwork of students from eight local schools. The Fright exhibit may be viewed in the Tile Gallery on the main floor of the art center.

“We encourage everyone to attend Dr. Gilliam’s art talk on Wednesday and to visit the Johnson Center and take advantage of the opportunity to see his amazing collection of face jugs,” Pritchett said. “The Face Jug Fright exhibit is excellent and it’s a must-see, too.”