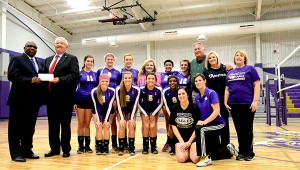 Goshen principal Major Lane and state Rep. Alan Boothe were on hand this week for the presentation of a $5,000 donation to benefit the softball field construction at Goshen High School. Joiining int he presentation were athletes and coaches at Goshen.
MESSENGER PHOTO/SCOTTIE BROWN

The Goshen Eagles softball team will soon be able to practice on a new field thanks to a $5,000 donation from the Alabama House Ways and Means Education Committee.

Major Lane, principal at Goshen High School, said the field had seen better days before the renovation began taking place, but his biggest concern was the safety for students.

The old softball facility was housed across the street from the high school, Lane said, but now all three fields, four including the gymnasium, will be on the same side of the street with a centrally located parking lot.

“It makes it much easier,” Lane said. “My major concern was the children crossing the streets trying to go to softball practice, and I think that was a major concern for a lot of parents. From a safety standpoint, it makes things much, much better. And all of a sudden you just have to park in one particular location to get to all of those facilities, so it’s really outstanding for us right now.

Rep. Alan Boothe, District 89, represented the Ways and Means Education committee and said the committee worked to help different schools with their needs.

“Through the Ways and Means committee, we get to disturb to our local school systems, and this was a part of the money that I had obtained for the Goshen softball field,” Boothe said.

Boothe said he was thankful Goshen’s request was met by the committee with a donation.

Lane said the donation from the committee came at a key point in time for the school. While the field is still under construction, Lane said the check would help pay for the updates and expressed extreme gratitude for the check.

“It makes you feel wonderful because you realize that you have people who are working with the Legislature and working with divisions of our government that are concerned about schools, small schools, like us,” Lane said. “It’s a great benefit for all of us. Even though we are in the process of building this facility, it doesn’t hurt to have additional funds to get things taken care of that haven’t been paid for. … I think it will help us go a long way to help us beautify our campus.”