PLAS vs. Fort Dale: ‘Kids know this is on the line’

The Pike Liberal Arts Patriots are facing what head coach Gene Allen calls a “must win” game Friday against the Fort Dale Eagles. 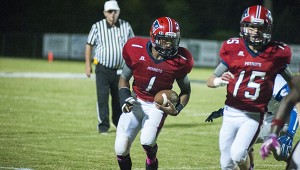 No. 1 JaMicheal Jones carries the ball for the Patriots while No. 15 Reed Jinright runs behind him. The Patriots are heading into a key matchup against the Fort Dale Eagles Friday at home.
MESSENGER PHOTO/FILE

While the Patriots lost 48-14 to Escambia last Friday, Allen said the team had pushed the game out of their minds and were focusing on securing their place in the playoffs, a goal the team has had from the beginning of the season.

“After the game, I told the team to forget about that game,” Allen said. “I told them to wipe it from our memory. I haven’t even watched the film. I had kids ask me about the film on Monday.”

While the Patriots sit at 6-3 for the season and the Eagles are 4-5, the two teams are evenly matched for regional play both having a 2-3 record. Allen said this game was as big of a determining factor for the Eagles as it was for the Patriots.

“The kids know this is on the line,” Allen said.

Allen said the team has looked to become a “little more physical” over the last week. “We’ve tried to be a little more physical this week,” Allen said. “We’ve got some new guys in new positions. We’ve just tried to make some minor changes, but we’ve had a really good week of practice.”

Allen, who has family from Greenville, said a lot was on the line not only for the team as a whole but for the seniors who had been on the team even when times were tough.

“It’ll be a great success if we get into the playoffs,” Allen said. “We have some seniors who were here two years ago when we just had 15 players. We had one night where we only dressed out 13 kids. They had to do a lot of stuff, and face a lot of adversity. This year has been great for them.”

The Patriots have faced adversity, Allen said, and he hopes the team will be able to overcome the obstacle facing them going into the game against Fort Dale Friday.

“Fort Dale is a rival for us,” Allen said. “We beat them three or four years ago, but we’re both playing for a playoff position. Fourth seed is the only seed that hasn’t been set. We’re just trying to make it into the playoffs. Once we get there, anything can happen.”

Kick off between the Patriots and the Eagles is 7 p.m. at Pike Liberal Arts.