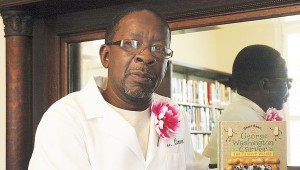 The Tupper Lightfoot Memorial Library in Brundidge will present Eddie Bailey in “Dr. Carver’s Workshop” at 10 and 11 a.m. Saturday. Bailey’s portrayal of Carver is an event of the Peanut Butter Festival. There is no admission charge. Everyone is encouraged to visit Carver’s workshop and learn more about the man who discovered more than 300 uses for the peanut.
MESSENGER PHOTO/JAINE TREADWELL

Carver, the Wizard of Tuskegee, went on to discover about 300 uses for the little peanut and, in the process, his work with the peanut revolutionized farming in the South.

“The boll weevil had destroyed the cotton crop in the South,” said Bailey who will portray Carver at the Peanut Butter Festival in Brundidge on Saturday. “The farmers had planted one cotton crop after the other until they had depleted the soil. Dr. Carver convinced the farmers to plant peanuts because they would put nutrients back in the soil. As the farmers began to plant peanuts the soil improved and they began making more money with peanuts than they had with cotton.”

Bailey said he is honored to portray Carver at the Peanut Butter Festival because it gives him an opportunity to tell others about a man that is one of his heroes.

“Most people think about peanuts when they think of Dr. Carver but he did so much more,” Bailey said. “He did almost as much with sweet potatoes as he did with peanuts. He was a very good artist and he was a good Christian man that thought more about others than he did about himself.”

Bailey said Carver was the son of slaves and his mother was taken from him at a very young age.

“He was very sickly and almost died with the whooping cough,” Bailey said.

“But he was a very curious little boy and spent a lot of time in the woods. He loved plants and learned to identify all of them. And, he wanted an education so he could learn about everything. But, being black, he had a very difficult time finding schools he could attend. He taught himself to read so he was able to learn many of the things he wanted to know about.”

Carver was extremely intelligent and applied to Highland University in Kansas.

“The college accepted him but, when they realized he was black, they wouldn’t let him in,” Bailey said. “But he was accepted at Simpson College and was later offered a position at Tuskegee Institute where Dr. Booker T. Washington was the president. He had a small workshop and he spent most of his time working there, teaching his students and taking long walks in the woods.

“He always had a flower the lapel of his coat and people said he talked to flowers. He didn’t care about money. He didn’t even cash many of his paychecks.

“He wanted to learn and he kept on learning all his life. He was kind spoken and never wavered in his Christian faith. He is my hero.”

Bailey invites everyone to visit Dr. Carver in his workshop at the Tupper Lightfoot Memorial Library and learn more about the “Father of the Peanut.”