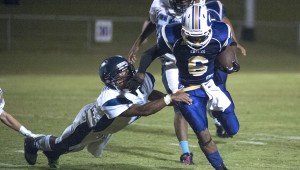 “It was just not a good week last week at all,” Snyder said. “We were not mentally ready. It was probably one of the worst weeks of practice we’d had all year.”

The Eagles’ performance was marred by crucial turnovers and ill-timed mental mistakes that ultimately lead to the upset loss.

“We didn’t play that bad, we just had all of those self-inflicted wounds,” Snyder said. “We can’t do that. They think they should have just walked in there and beat Highland Home.”

But Tuesday, Snyder was much more optimistic and pleased with his team’s attitude ahead of their matchup with cross-county rival Zion Chapel on Friday night.

Snyder said his team came out of last week’s loss more focused and sharp than he had seen them in a while. The loss served as a wakeup call to the team. And while no one wants to learn those lessons with an eye opening loss like the one to Highland Home last week, Snyder said his team came out of that game ready to learn from their mistakes and get better.

“Yesterday was a good day of practice and we hope to add another day today,” Snyder said. “Guys were working extremely hard in practice and were making a lot less mistakes than they were last week. We were able to do some things that we were not able to do last week and we’re excited about it. Our work yesterday was much better than last Monday.”

Part of the lesson his team learned last week is to never take a team lightly.

And although Zion Chapel is off to a rough 1-7 start, the Rebels are still as dangerous as any team, and the Eagles can ill afford to overlook them.

“I think last week was a good eye opener for our guys,” Snyder said. “Zion is not a bad ball team. They are young, but we matchup pretty well with each other. They don’t make a lot of mistakes. We can’t make any mistakes either.”

Friday’s matchup with Zion Chapel is imperative if Goshen wants to control their own destiny in Region 3. With a win, the Eagles can secure second place in the region.

The Rebels have a young team, but Snyder believes they have the athletes at key skill positions to matchup with and give fits to the Eagles.

And for a Goshen team looking to establish their supremacy in the region,  Zion Chapel is no easy obstacle.

“A loss in this ball game Friday night would be detrimental to our season,” Snyder said. “A win, we believe, will give us control of second place. We can control our own destiny.”

For Snyder and his Eagles squad, the key to controlling their own destiny is simple. Play Goshen football.

“If we can get back to playing Goshen football Friday night, I think that we’ll have a chance of winning.”