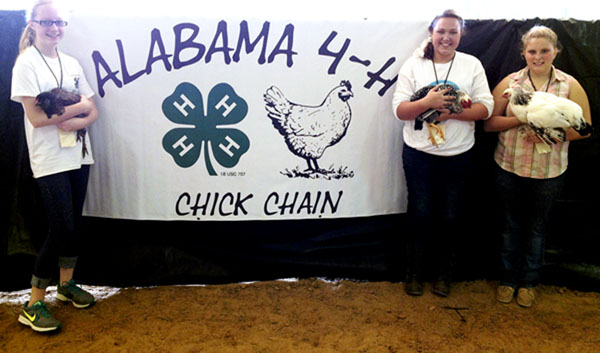 The 2014 Southeast Alabama 4-H Chick Chain Show and Auction was held Saturday at the Ag-Plex Arena with youth from eight counties competing.

The show marked the completion of an 18-20 week project where 4-H members cared and raised 18 young female chickens or pullets.

“These 4-H’ers began their journey by selecting 18 tiny day-old chicks, six each of three breeds, with the intention to grow egg-laying birds,” said Grant Lyons, Pike County Extension coordinator. “The youth select the three best birds of the same breed from their flock to take to the 4-H Chick Chain Show and Auction. Once there, each pen of three pullets was judged based on health and appearance of the birds.”

The breeds represented at the show include some of the best egg-layers: Buff Orpington, Light Brahma, Silver Laced Wyandotte, Rhode Island Red and Easter Egger. Grand and reserve champion winners were awarded by county and overall by breed.

“One of our Pike County 4-H’ers, Alisa Kay Culpepper, took home the second highest award at the show, capturing Reserve Champion for her pen of Easter Eggers,” Lyons said “She also placed first in the Pike County group.”

Culpepper said she was excited to have her birds chosen for Reserve.

“I spent a lot of time working with the birds and it was fun to see the work pay off,” Culpepper said.

The 4-H’ers competed in showmanship events Saturday afternoon. These events highlighted the animal husbandry knowledge and skills that the 4-H’ers have learned throughout the project.

“These events include having students handle and show birds, and also interviews with the judges,” said Lyons. “Half of the showmanship score is based on each youth’s accuracy, creativity, and neatness in keeping records for his or her flock.”

Following the competition and auction each youth was allowed to keep his or her remaining flock.

“Some of the youth plan to sell their birds, while others have become so attached to their pets they can’t part with them,” Lyons said. “Others have decided to become entrepreneurs, producing and selling eggs. Regardless of the path chosen, these youth have learned responsibility and life skills throughout this 4-H project.”

For more information on the Chick Chain project, contact the Pike County Extension Office at 566-0985.