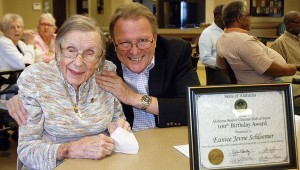 Eunice Jevne Schloemer was inducted into the 2014 Alabama Senior Citizens Hall of Fame. Schloemer, a centenarian, is the mother of Dr. Richard Schloemer of Troy.
MESSENGER PHOTO/JAINE TREADWELL

The Troy Nutrition Center is bursting at the seams with pride in that three members of the Center’s family have been named to the 2014 Alabama Senior Citizens Hall of Fame.

Eunice Jevne Schloemer and Albert and Mildred Baker were name to the prestigious Hall of Fame last week. Schloemer has graciously reached 100 years young and the Bakers are celebrating 65 years of marriage.

Schloemer moved to Alabama two years ago to live with her son, Dr. Richard Schloemer. The winters in East Lansing, Mich. were just a little too cold and the sunny South and family were enough to entice Schloemer from the place she called home.

Schloemer taught kindergarten through third grade in East Lansing for 20 years. Her husband, Clarence L. Schloemer, was a professor at Michigan State University.

“After my dad’s death in 2007, mother wanted to stay in Michigan but a couple of years ago, she let me know she was ready to move south,” Richard Schloemer said. “I’m honored to have her here with me. My sister, Sally, lives nearby so mother is with family.”

Schloemer said having his mother for so many years is a blessing. Actually, he is twice blessed.

“My father died at the age of 95 so I was blessed to have had him for all those years,” Schloemer said. “I’ve not had to mourn the loss of my mother. So many people my age haven’t had the opportunity that I have. They don’t have pay-back time. Having my mother live with me these two years, I’ve had pay-back time. I’ve gotten to give back some of the love and caring she gave to me. I’m so thankful I’ve been able to do that. It is a blessing.”

The Bakers said they, too, have been blessed — blessed to have each other for 65 years.

Although they came from opposite sides of the creek, he from the east side and she from the west, they made a life together that was filled with love, happiness and, maybe, a disagreement or two.

“All married couples have their disagreements and we’ve had ours but nothing to amount to anything,” Albert Baker said, with a smile.

The Bakers met in 1945 at Whitewater Baptist Church and he thought she was a “good looking girl.”

Mildred Baker said it was love at first sight or “something like that.”

Albert was the oldest of 12 children and he’d done his share of farm work. So, in 1952, the couple moved to the big city of Detroit with big dreams of a better way of life. He went to work for Packard Motor Company and then went into the trucking business driving an 18-wheeler.

Mildred cared for their five children at home and, when the children got older, she delved into real estate and tutored children.

When he retired in 1990, they moved home to Alabama and “just love it.”

As for tips on a long, happy marriage, the Bakers agreed the key is loving each other with a love that is strong enough to overcome any differences that come along.

“We got married young, she was 18 and I was 19, but love overcomes all things,” he said. “Love is what keeps a marriage together.”