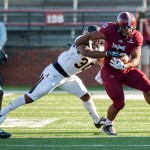 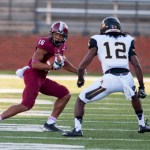 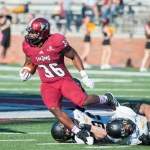 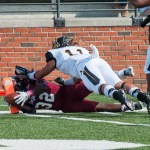 Troy’s Brandon Burks (32) dives for a touchdown as the Trojan’s score in the first quarter against Appalachian State Saturday at Veterans Memorial Stadium. (Troy Messenger/Joey Meredith)

Coming off their first win of the season last week which featured an explosive performance in the running game, Troy University was flying high and seemed to have some extra wind in their sails coming into Saturday’s matchup with Sun Belt newcomers Appalachian State.

But in a performance that seemed the polar opposite of their win last week, the Trojans fell flat, running into a wood chipper that was the Appalachian State defense and falling to the Mountaineers 53-14.

“We got woodshedded,” head coach Larry Blakeney said. “If you were here, you obviously noticed.”

Appalachian State, not known for being a power on defense, suffocated the Trojans and stymied a Troy running attack that gained 360 yards last week, holding them to just 79 yards on the ground.

The Troy defense, which had been opportunistic in creating turnovers and sacks last week, were shredded by a run-happy Appalachian State team, allowing the Mountaineers to gain 437 yards rushing.

“They had a pretty good offense today and we really hurt ourselves today,” Troy safety JaQuadrian Lewis said. “You come into every game knowing what the opposite team can do and what they can’t do and they just outplayed us. We had a bunch of missed assignments today and we just have to work harder.”

Running back Brandon Burks, coming off a career game one week ago, was shut down by the Mountaineers, as he was held to just 42 yards on six carries.

And Silvers, who had a record-setting 119 pass attempts without an interception this season threw a pick in his second straight game.

Early on, Troy’s offense picked up where they left off last week, taking an action-packed opening possession 73 yards for a TD on a Brandon Burks five-yard run. The drive featured a conversion on fourth-and-eight and was assisted by two consecutive Appalachian State unsportsmanlike conduct penalties, the second of which was called a targeting foul and resulted in Mountaineer defensive back Joel Ross’s ejection from the game.

But almost as quickly as the Troy offense made it to the sideline, Appalachian State responded on the first play of their opening drive, a 54-yard touchdown pass from freshman quarterback Taylor Lamb to wide receiver Malachi Jones. It took the Mountaineers just 19 seconds to even the score to 7-7.

From there, the Trojan offense began to sputter. After the Mountaineers added a field goal to push the lead to 10-7, Trojan quarterback Brandon Silvers committed a costly turnover in his own territory, a fumble on a quarterback keeper that Mountaineer defensive lineman Olawale Dada scooped up and returned for a touchdown, putting the Trojans down 17-7.

One of the few bright spots of the day for Troy came early in the second quarter after the Trojans had fallen behind 24-7. Wide receiver Chandler Worthy fielded a Mountaineer kickoff from his own one-yard line and returned it 99 yards for a touchdown, tying him for the third-longest kick return in the Larry Blakeney era.

And in a play that embodied the Trojans’ luck Saturday, Appalachian State was awarded a safety when Lewis forced a Mountaineer fumble in the Trojan end zone, but Troy linebacker Mark Wilson recovered the fumble, ran out of the end zone, then was tackled behind the goal line for a safety, ending the half with Troy down 26-14.

“It was a bang-bang play,” Blakeney said. “I think a lot of players would have done the same thing, run back into the end zone to try and avoid pressure.”

In the third quarter alone, Appalachian State rushed for 125 yards, adding rushing scores of 33 and 16 to put the Mountaineers up 40-14.

The Mountaineers added two inconsequential scores in the fourth with a Marcus Cox one-yard rush TD and a Kameron Bryant three-yard rush TD.

“We’ve got two games in a really short period of time,” Blakeney said. We’re playing on Friday night against a dang good South Alabama team. We’ve got our work cut out for us. We just got whooped. If we’re the right kind of people, I think it will motivate us.”