Tigers take a bite out of Zion Chapel 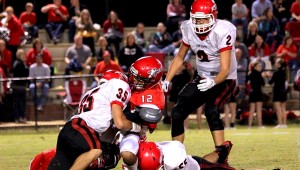 Head coach for the Rebels Bradley Bowers said the team had gone into the game aware of the battle they would face in Luverne, but Bowers said he was still proud of the effort the team showed despite the loss. “We knew going in that Luverne was a very good football team,” Bowers said. “They did some things that were going to give us some trouble. But our goal was for us to come out and compete. I thought we did what we wanted by limiting some of Luverne’s big plays.”

Bowers said the team had worked defensively during the game to be able to hold the Tigers to two or three bigger plays in the first half. But Bowers thought the big impact the team had against Luverne was following an interception by Payton Wilkerson.

“We were able to limit them to one or two big plays in the first half,” Bowers said. “Offensively, we wanted to be able to run the ball and control the clock, and we had a little trouble with that. We made adjustments in the second half. We had kind of done a couple of things differently. We were trying not to be predictable on defense. There were times when we tried to show them a little different coverage.”

While Bowers said the team may not have been able to keep possession of the ball the way the coaching staff would have liked, he said the Rebels were able to finish a drive early in the third quarter.

“We scored on our first drive in the third quarter,” Bowers said. “It was one of those drives where we were able to come out and be able to define the line of scrimmage.”

Despite the loss, Bowers said he was thankful his team had been able to compete against the Tigers Friday.

“As a coach, you are never pleased with a loss,” Bowers said. “That’s what I told the guys. Never be satisfied with a loss, no matter the situation in life. But looking back at it, and talking with coaches, we felt that we competed. Were there things that we could have done to make things closer? Yes. But we felt like we competed.”