The Patriot: At 92, Hathaway recognized for her efforts to support the troops during World War II 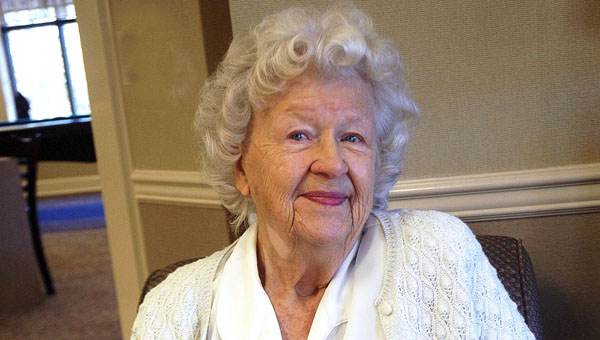 Irene Hathaway, 92, was recognized by the conductor of the U.S. Air Force Concert Band during a recent concert in Troy. Hathaway was honored for her service as a USO hostess and parachute packer during World War II. ‘I was proud to do what little I could for my country,’ she said. Inset below, Hathaway during wartime while she was living in Maine. (Messenger Photo/ Jaine Treadwell)

At age 92, Irene Hathaway never expected to be recognized for anything except her age.

That’s why she laughingly told her friends at the Troy Nutrition Center that the U.S. Air Force Concert Band was coming to Troy for her birthday on Oct. 13.

“I didn’t really expect them to recognize me, but they did and it was so exciting,” Hathaway said. 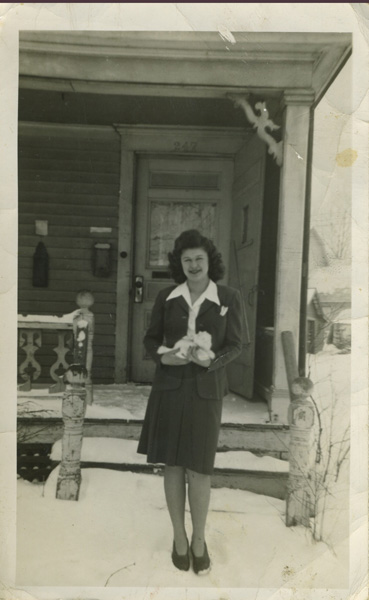 Col. Larry H. Lang, commander and band conductor, recognized Hathaway along with several dignitaries at the concert at Troy University Monday night. And, it was not just for her age that Hathaway was recognized. Lang singled her out in the audience for her service as a hostess with the USO during World War II and as a packer of parachutes for America’s soldiers. Her service was worth the recognition.

Hathaway has led an “interesting” life, but she said being recognized for her service to her country was the greatest honor she could receive.

“I was proud to do what little I could for my country,” she said. “I never thought anybody would recognize me for that.”

As a country girl from Adel, Georgia, Hathaway had high hopes of playing professional basketball when she graduated high school. She never thought she would “wind up” in a small town in frigid Maine packing parachutes for soldiers in a far away land.

“I was a pretty good basketball player,” Hathaway said with a smile. “I was five feet, seven inches tall and that was pretty tall for a guard. We had several good basketball players on the team and a man wanted us to play professionally. We went into Atlanta to play a team there and we beat them good – 70-2.”

Scoring 70 points was reason to boast but holding a good team to two points was really a feat. And, Hathaway had a whole lot to do with that.

“Back then, girls played with three forwards and three guards and they played half court,” she said. “So the guards never shot the ball. We just ‘guarded’ the other team. Two points. That’s all Atlanta got on us.”

When the war came along, Hathaway’s dream of playing professional basketball ended.

“The whole school went in the auditorium and listened to the radio as President Roosevelt declared war,” she said. “That was a scary time. Everything changed.”

After graduation, Hathaway went to Maine with a relative and decided to stay.

“My first date there was on a dog sled,” she said, laughing. “Presque isle was a small town and there wasn’t much to do.”

Hathaway needed something to occupy her time in the Pine Tree State but something worthwhile so she volunteered with the USO and at a hospital that provided care for wounded soldiers.

“I would write letters for the soldiers and read to them and I felt like I was doing something worthwhile,” she said. “When I got a chance to work at a parachute factory, I took it. Everybody wanted to do something to support the war effort and I wanted to do all I could.”

Hathaway said packing parachutes was a rather involved process and a very exacting one.

“We would attach both ends of the parachute to a table and the lines had to be placed in such a way that they would not twist in the least,” she said. “Then, the parachute material had to be folded to the exact right size and it was placed inside the pack in an exact way and sealed. Then the pack had to be inspected and you had to sign the inspection card so if something was wrong, they knew where to look.”

“The lives of our paratroopers depended on what we did,” she said. “When they pulled the rip cord, that parachute had to open. Their lives were in our hands.”

Hathaway had a tag to her parachute-packing story and it’s one she likes to tell again and again.

“Presque isle was right up near Canada so a lot of the girls that packed parachutes were French Canadians,” Hathaway said. “Clark Gable was coming to visit the parachute factory and everybody was so excited. The Canadian girls were going to speak to him in French and they taught me something to say to him.”

When Gable visited Hathaway’s packing table, she spoke to him in French just as she had been instructed.

“I didn’t know it but what I said was, ‘Will you take me dancing?’ so I was surprised when he invited me – in English — to a ball at his hotel that night. And, I went.”

Hathaway’s Canadian friends were surprised and envious that their joke on Hathaway had turned in her favor.

“When I got back to work, they wanted to know all about the ball,” Hathaway said. “They asked if I danced with Clark Gable and I told them that I didn’t dance with old men.”

Gable was in his 40s at the time and Hathaway said, although he didn’t ask her to dance, he did invite her to a dance and not many women can say that.

Hathaway met and fell in love with an airplane mechanic but refused to marry him because she didn’t want to live a military kind of life.

She came back to Georgia and John Hathaway followed her. They got married and he worked in civil service in Florida and with A&P stores.

“I knew he wasn’t happy so I asked him why he didn’t go back in the service and he did,” Hathaway said. “We lived the military kind of life for 21 years. We traveled all of the United States with our five children. We had a good life together.”

Looking back on her life, Hathaway said her hopes of being a professional basketball player died with the beginning of World War II. But, she had an opportunity to do something much more important – packing parachutes for America’s soldiers and holding their lives in her hands.